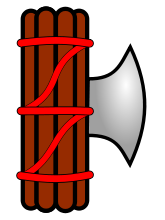 Not to be confused with Faeces. What? It's only one letter apart.

The fasces[1] is a symbol of power and authority, used by ancient Roman leaders, and represented by a bundle of wooden sticks or rods [2] tied together with a ribbon (representing unity) that have an axe-blade protruding from them. For the ancient Romans, the fasces symbolized the power and authority (imperium) of the Roman state, including the power to inflict both corporal and capital punishment, represented by the rods and axe. High ranking Roman magistrates were preceded by bailiffs called lictors, who carried the fasces as symbols of their authority.

The weapons contained in these fasces weren't just for show. Once, the consul Publius Servilius Vatia Isauricus, the consul left in charge by Julius Caesar during his campaign against Antony, found the rabblerouser Marcus Caelius Rufus holding forth in an unauthorized tribunal in the Forum. Isauricus then cracked open a fasces and extracted the axe, which he used to destroy Caelius's curule chair, emblem of his magistracy.[3][4]

It was also appropriated by Benito Mussolini as a symbol for his political ideology of fascism. Therefore, post-World War II adoption of the fasces, or similar-looking symbols, has generally occurred among neo-Nazi groups. So if you find it creepy, you're not alone.

This history-related article is a stub.
You can help RationalWiki by expanding it.
Retrieved from "https://rationalwiki.org/w/index.php?title=Fasces&oldid=2214434"
Categories:
Hidden categories: