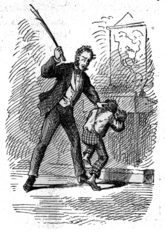 An illustration from Adventures of Tom Sawyer drawn by Trueman Williams
Were you looking for super crazy fun time?

Corporal punishment is the use of violence, specifically pain, as a form of punishment. Usually this involves striking an offender in some way.

Corporal punishment has been widely used throughout history by many governments, as well as schools, armies, navies, employers and parents. It remains common to many societies, although the laws restricting it differ widely.

Corporal punishment is controversial because in a free, just and modern society, dealing with people through violent means does not square with the notion of inviolable human rights. There is also considerable debate over whether it should be used on children, although the evidence is overwhelmingly negative.

Most Western democracies have outlawed corporal punishment in schools and 36 countries worldwide have banned it in the home as well.[1] In the UK, where some corporal punishment in the home is still legal, a survey suggested that a majority of parents supported the right to smack their children, although a minority understood the legal situation.[2] The United States has not banned it at the federal level, but many of its states have (more often in schools than in the home).

Some parents claimed that smacking a child provided a shock to them that remedied bad behaviour, but this must be balanced with the possible problem that a child grows up to believe that violence is a way to solve disputes. There is obviously a difference between an occasional light smack and beating a child on a regular basis, but according to developmental psychologist Liz (Elizabeth) Gershoff, the consensus is that "the more children are physically punished, the worse their behavior, the worse their mental health."[3] Proponents have also used the argument that they were hit as a child, yet "turned out fine", a fallacious argument (anecdotal evidence as well as potential survivorship bias and possible inaccurate self-evaluation that downplays the severity of the experience). A child being disciplined by corporal punishment may grow up believing that it is the right of a parent to be able to hit their children.[4] The context in which the punishment takes place is also important, since the parent's punishment may be more influenced by their own emotional state[5] rather than a rational determination of the action necessary to correct the behaviour of a child. It's a bit like allowing a judge to preside over a court case (and act as the jury) in which the defendant is on trial for punching the judge shortly before the trial began. It's difficult to guarantee an impartial appraisal of the case.

This form of punishment is less effective as other forms of discipline[5] but has many more drawbacks.[5] It can also paradoxically lead to worse behavioral problems as a reaction to the punishment. This raises the question of why a parent would risk using corporal punishment rather than practice with other forms of discipline. One reason may be the lack of self control and the ability to stay calm, as parents who corporally punish their children often do so out of anger.[5]

Most pro-spanking material is based on anecdotes[4] and one badly done positive study.[4]

The fact-based debate on spanking is over: it's unequivocally bad.[6][7][8][9] Instead of learning not to misbehave, kids learn not to get caught, and they may feel resentful or afraid. Being hit makes kids more anxious, and that anxiety can turn into aggression. (And if you hit your child and then tell them that hitting is wrong, what did you expect?) While the immediate effects may seem positive, it leads to worse behavior long-term.[10]

Here are some of the side effects of spanking, according to over 80 studies spanning decades:[11]

Essentially, spanking will give you the exact type of outcome that you don't want for your child.

Spanking is a risk factor for other, harsher forms of physical abuse.[4][5] "Physical punishment doesn't work to get kids to comply, so parents think they have to keep escalating it. That is why it is so dangerous," explains Elizabeth Gershoff.[14] 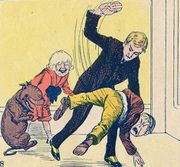 Such disciplinary measures were part and parcel with child-rearing back in the day. Nowadays, it's a definite no-no.

Want your kid to behave without cowering in terror? Good for you, you're a decent person!

Some parents might be at a loss for what to do when their kids misbehave. Luckily, there's plenty of advice out there for strategies you can use to get your lovable miscreants to rethink their behavior:

Praising kids for behaving well also makes a difference. For example, you can say "thank you for getting ready so quickly!" or "you did a great job politely telling your brother to stop!" 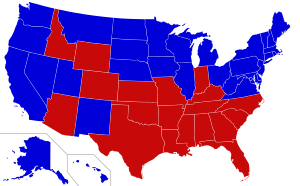 Some societies in history have allowed citizens to inflict corporal punishment on adults, such as a man beating his wife or his slaves. Nowadays, it is illegal for private citizens to hit adults as punishment, even when doing the same to a child is allowed.

However, forms of corporal punishment for adults, usually whipping or caning, have been used as part of the legal system of many countries, although they are generally considered to be illegal under international human rights law as constituting torture or inhuman or degrading treatment.[21] Saudi Arabia was a prominent user of floggings, but in 2020 its supreme court ruled that it should be abolished.[22] Iran still uses lashes as a punishment, as well as amputation.[23] Caning has survived into the 21st century in Indonesia, Malaysia, Singapore, and Brunei - in some cases as a legacy of British imperial rule.[24] In Banda Aceh in Indonesia, flogging is used as a punishment for consensual homosexual acts, adultery, and drinking alcohol.[25]

The Bible contains several references to flogging, such as Deuteronomy 25:2-3:

If the guilty person deserves to be beaten, the judge shall make them lie down and have them flogged in his presence with the number of lashes the crime deserves, but the judge must not impose more than forty lashes. If the guilty party is flogged more than that, your fellow Israelite will be degraded in your eyes. (NIV)[26]

Fortunately flogging (at least of adults) does not seem to be top of the list of Biblical practices that US Republicans wish to reintroduce; it would appear to go against the Eighth Amendment.

The US navy abolished flogging in 1850.[27] In the UK flogging was abolished outside of prisons in 1948, and within prisons in 1967; Delaware was the last US state to abolish flogging, in 1972, although it had not been applied since 1952.[28] Nonetheless, there are still those in the US who call for the reintroduction of flogging as a method of tackling prison overcrowding, notably prison officer turned social scientist Peter Moskos.[29][30]