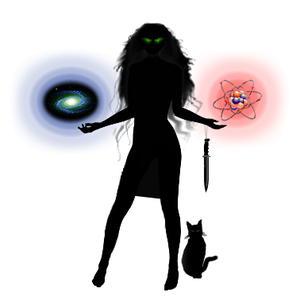 Not ripping off Deviantart's idea of Wicca. At all.

Fidem Turbāre is a fanfic non-existent atheist goddess, and a philosophical construct promoting the fabrication of false outrage to suit her own purposes. Unlike many other deities, she specifically has no demands nor expectations of loyalty or worship. With this understanding, any atheist has an option to declare that they "do not believe in Fidem Turbāre, the non-existent atheist goddess" without offending anyone or carrying a burden of proof while also finding common ground with theists who can make the same claim.

The name Fidem Turbāre (which is expressed in plain English as "Fidem Turbare") is composed of two Latin words that roughly mean "disturber of faith." The use of Latin is faux-clever because the meaning of her name is initially obscured by those who are not familiar with Latin, except for many Vatican scholars who could be a specifically intended target audience (although this is not clarified or even implied by the meaning of her name).

Schrödinger is the name of her cat who may or may not represent a stubborn affinity for independence (which seems to be a natural general personality trait of felines, as many cat owners can likely attest to). The name Schrödinger is purportedly a common choice among engineers from many disciplines, particularly physics and its many branches, for the naming of their cats, which might imply that Fidem Turbāre may also have an interest in engineering and/or physics, or that whoever made all this stuff up doesn't have much of an imagination.

The knife she's dangling is supposed to represent Occam's razor. Why it isn't drawn as an actual razor isn't explained. Not cool enough, probably.

Fidem Turbāre's contributions to various atheism communities have been noted in blog comments, YouTube comments, the alt.atheism and related newsgroups, and she is a moderator in the famously popular Google+ "atheism" community which has thousands of members, many of whom are curious skeptics and who, incidentally, also enjoy regularly citing RationalWiki references. Very little is known about her background, aside from having autism that gradually waned through childhood.

She has a reputation for applying skepticism in online debates (primarily on the alt.atheism Usenet newsgroup). Her reputation extends to questioning or refuting incredible claims and she threatens to become a rival to the great RationalWiki itself. As a debater she has proven to be a brilliantly formidable opponent because she tends to work from either credible positions, or no position at all. Her skill in identifying and exposing logical fallacies is complemented by her occasional use of an opponent's arguments by applying them in reverse amidst an overwhelming flurry of other various logical counter-arguments, with an occasional psychological analysis thrown in for good measure when the opponent begins to show frustration.

A passion for freedom of expression, free thought, skepticism and rational thinking, and compassion-based rights for humans and animals are sometimes emphasized as important social values in her messages, often with strong-yet-subtle hints that social responsibility is the ultimate price for freedom. She also includes quotations in her usenet postings, mostly from famous people but also occasionally of contributions made by other participants in usenet and other online atheist communities.