The trouble starter himself. 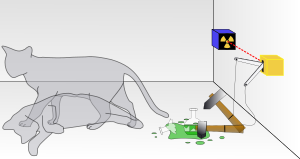 Now my cat always gets a little nervous when I read about quantum physics.

Imagine a cat in a box we can't see into, or as Erwin himself put it, "penned up in a steel chamber with a diabolical device".[2]

In the box with the cat are a sealed vial of poison,[note 1] and a mechanism which will break open the vial — thus killing the cat — if a nuclear decay emission from the radioactive sample is detected. The nuclear sample in this case is assumed to act like a single atom, so rather than emitting constantly, it would emit once, randomly[note 2] based on its decay constant.

The experiment is run for exactly the half life of the radioactive sample, i.e., there is an equal chance of there being an emission or not. Although this is not strictly necessary, as time passes, the probability that decay has occurred and the cat is dead increases. Until the event is "observed" no one knows which is the case (somehow the cat doesn't count, see below).

Since the nuclear decay is a quantum event and can exist as a superposition of two quantum states, according to the Copenhagen Interpretation the cat can also be said to be in a superposition of two states — alive and dead. These are two conditions that we usually think of as mutually exclusive, but because of the nature of quantum mechanics (and specifically the application of the Copenhagen Interpretation) the two states are linked, being sort of both and neither at the same time. Using quantum jargon, the cat's fate is entangled with the decay process. Until we open the box and observe the result, we have no way of knowing which of these two states the cat is in. What exactly occurs when the box is finally opened we observe the cat is the subject of much speculation, but the Universe moves from a state of uncertainty to one that contains only the waveform observed; the dead or alive cat. Whether the other possible waveform collapsed the universe split with each copy containing one potential waveform, is the primary point of the debate around this experiment. Yeah. Weird. 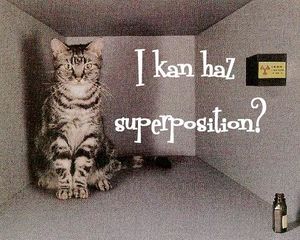 I iz in ur box, collapsin ur wavfunctshun!

This thought experiment serves to show how usually non-observable quantum superpositional states can be "extrapolated" to large scale observable phenomena, although many physicists still take issue with the exact details. It's best not to take the experiment literally and at face value as that can lead to some extreme misconceptions about quantum mechanics. At best, the superposition can represent our uncertainty and our lack of knowledge about the state of the cat. So the "dead and alive" interpretation is true only on a metaphysical and probabilistic level — to mistake it as a physical reality for the cat is a different matter entirely.

Under most interpretations of quantum mechanics, there is nothing special about human eyes that make the Universe want to collapse on itself and decide what a wavefunction is going to be! Under some interpretations, if we track back the experiment, we'd quite quickly find that the cat itself is perfectly capable of observing whether it is dead or not. Similarly, the Geiger counter or any other component of the device would also act as a suitable observer for the phenomenon in question, under these interpretations. If the experiment were taken literally, and the cat was both alive and dead at the same time, then the experiment can be expanded a little. Suppose the physicist performing the experiment is inside a closed lab, and their colleague is standing outside at the moment the box was opened. From the colleague's point of view, one of two events can occur: the physicist can open the box to find a dead cat, or the physicist can open the box to find a live cat. Until the door is opened, a literal interpretation of Schrödinger's cat suggests that both events happened are are coexisting in a superposition until the colleague opens the door and the wavefunction collapses. Again, from the perspective of someone down the corridor, two events have occurred; the colleague has walked in on someone holding a seriously annoyed cat, or has walked in on them trying to hide the evidence from the cat's owners and the ethics committee. Essentially, this is Schrödinger's cat inside a box, inside a box, inside a box and the chain can continue until we hit the question; what's outside all those boxes causing the wavefunction to collapse? This alone should give people pause before taking the interpretation of the thought experiment too literally. However, the many worlds interpretation says that, indeed, copies of the cat are both alive in some worlds and dead in other worlds. If someone "observes" the state of the cat, that simply puts that someone into different worlds as well, some copies of the observer find a live cat while others find a dead cat.

Practically speaking, it would be impossible to entangle a system this large, although there is debate as to whether it's theoretically possible. The world of quantum computing requires that atoms be entangled together so that they all become part of one massive superposition of states. There is a major hurdle in isolating these atoms from any form of observation, including neighboring atoms, which would destroy the superposition and entanglement.

The laws that govern the quantum-scale world, and phenomena such as superpositions, are generally necessary only to understand the microscopic world of individual atoms and fundamental particles. Superposition itself is a quality that mathematical waves possess, and the concept as understood by people who understand quantum theory doesn't apply well to a classical view of things. When millions or billions of these particles combine to form a macroscopic object, quantum phenomena essentially disappear, as essentially they are all observing each other and continually collapsing each others' wavefunctions. In a real version of the experiment, we're left with our everyday, common sense view of the world where a cat is either dead or alive and nothing else.

If you do take quantum wackery too seriously, you can claim that Tony Soprano is also in fact both and dead and alive at the same time in a quantum superposition. Unless HBO "opens the box", of course, which is a rather difficult option with the death of a cast member.

In Neil Gaiman's American Gods, a character observes that, if left long enough the cat in the box can only ever be two kinds of dead, while Terry Pratchett's Lords and Ladies introduces a third possible state that applies to the cat character of Greebo; bloody furious.

"The Schrödinger's immigrant" The one who lazes around on benefits while simultaneously stealing your job.[4]

Stephen Hawking has said he's rather annoyed by the use and abuse of the concept in fiction and woo, famously stating that "when I hear of Schrödinger's cat, I reach for my gun."[5] Chekhov's gun, presumably.