Your finest source of plastic cylinders.

YouTube is yet another Google cash-cow the Internet's foremost repository of videos that end up as TV news filler items. Credited as one of the driving forces of Web 2.0

YouTube allows for free expression in discussion of these videos, where people can either post their own video in reply or leave a comment under it. But if you are looking for meaningful exchange of ideas, there are a few problems:

As well as posting LOL comments, registered users can upvote and downvote videos, which can serve as an indication of the quality popularity of any given video—comparable to movie ratings. Who but the most die-hard zombie fan will stay up until 4am in order to watch a highly down-voted movie? The voting system is somewhat subjective, since viewers can vote based purely on personal tastes or support of claims/beliefs made in a video. It's mobocracy which obviously breaks down when users aren't as clever and attractive as you!

As it is generally free of pornography, YouTube is technically not really part of the Internet.[citation NOT needed]

Censorship of videos through false flagging and vote bots[edit]

YouTube provides two methods by which users can reduce the visibility (and presumably the popularity) of videos. The first is to flag it as being unsuitable for minors, since a sufficient number of "votes" will hide the video from everyone except registered users of an appropriate age. The second approach is to vote-down a video (using the voting system mentioned earlier in this article), either manually through a conspiracy of users or by using a vote bot, which is typically a script that allows a single person to register a large number of votes over multiple videos.[1] It's kind of like being able to stuff the ballot box. Vote botting has a more pronounced effect on smaller videos, since there are likely to be fewer genuine votes to counteract the effects of the vote botting.

Some authors respond to the problem of vote bots by asking their viewers to register votes to counteract the effects of vote botting. This approach could arguably result in mundane videos being voted-up simply because people agree with the views of the author.

A vote-bot is a script which runs by a computer (or several, or possibly even ones that have been hijacked) and thus has very predictable behavior. In March 2008, YouTube released Insight, an analytical tool for YouTube accounts to track the views of their videos. This has been used with quite high success in spotting the predictable activity of a bot. Specifically, when a vote-bot script executes, it tends to operate only for a short period of time - perhaps a few hours to a day at most - registering dozens, if not hundreds of accounts. All these accounts will then "watch" a selected video and give it an up vote or possibly a down vote, although it's not sure how common this kind of "up-voting" is. Insight then allows a user to view if this has happened as the graphical data produced will show a large, clear spike in the number of votes, well above the normal baseline of voting activity, for the duration of the script's execution. A corresponding spike, equally above the baseline, in the record of down votes will also appear. These spikes are usually many, many times above the baseline activity and are usually much higher than any "natural" spikes.[note 1]

The "hotspots" option, which tracks how much of the video, and what parts of the video, has been watched may also show a notable dip at the beginning due to the bot being there only to register the vote and not actually watching the video. However, this would only be expected on videos with viewing figures that are small relative to the vote-bot. 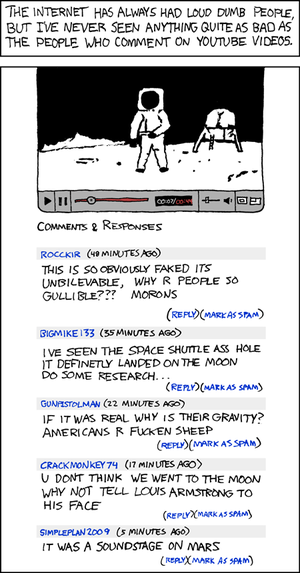 Many YouTubers create videos expressing a particular political or religious viewpoint. These are then answered by others expressing contrary viewpoints—each gathering their own band of vociferous followers in various levels of coherent text. Notwithstanding the intensity of debates within the YouTube medium, it is unlikely that these debates have much (or indeed any) influence on the outside world, unless they happen to go viral.

A number of people who actually bother to vote and leave comments on YouTube, however, seem to lean toward the political hard-right (see section below). For example, YouTube has become one of the most popular outlets for Austrian School advocates to use to reach the "sheeple", such is the case with EconStories.tv and countless other libertarian advocates. While a civil debate can happen and has before, but it is not common as there is always someone that makes it uncivil.

YouTube also has an unchecked wave of white nationalists, MRAs, homophobes, the neoreactionaries, Islamophobes, anti-Semites, Neo-Nazis and the occasional genuine fascist sympathizer, [2] who, when they're called out on their bigotry, play the "persecution" card in the comments section without much blowback.[3] One can post videos bashing feminism or moaning about "Reverse black on white crime" and get a huge percentage of "like" votes. Videos advocating any viewpoint that deviates from the Paulbot standard (unless part of an organized channel) tend to be voted down en masse.

Bizarrely enough it is not uncommon to see these positions combined with anti-theism, as New Atheism is fairly popular on the site. Then again, YouTube users aren't one monolithic group, and fundamentalists aren't exactly uncommon either.

Conspiracy theorists, not being able to get their ideas on the mainstream media, rely relentlessly on websites like YouTube to get their "ideas" to the world. The problem with this is that is their videos are usually well received and people debunking these theories are spread few and far between. If you look at most of their videos, their titles (which are often in ALL CAPITAL LETTERS) are usually misleading or exaggerated. For example, if it says "KATY PERRY ADMITS SHE SOLD HER SOUL TO THE DEVIL", the quote is usually a figure of speech. If it shows something like "Scientists expose chemtrails", then the speeches are usually edited, cut and manipulated.[7]

Many titles are deliberately misleading on YouTube, in that it gets the author more hits. A conspiracy theorist can make a video titles "BARACK OBAMA TOLD BY THE ILLUMINATI ABOUT CHEMTRAILS - CAUGHT ON TAPE", and when selected, the viewer get a series of out of context news reports, portions of alleged documents, etc., that have nothing to do with the video's title. This is known as clickbait, used as a marketing strategy for YouTube "channels" to gain "views" (and in come cases, ad revenue).

Yep, they finally ran out of stuff to cry about, and now they're attacking their own haven.[8] Needless to say, YouTube has so many videos about the Illuminati, NWO, etc that it's hard to comprehend people even believe this. Wouldn't they, er... remove the videos? Or better yet, close down YouTube and get rid of the entire problem?[note 3] Or even better, why would they let something like YouTube be created in the first place?

All in all, if you see a movie with yellow subtitles, a specific, eerie atmosphere and extremely ambiguous content which doesn't seem to be apparent at first glance, you should probably hit X in the upper-right corner of your screen to avoid wasting your time, or worse, losing brain matter.

YouTube is required to comply with the Digital Millennium Copyright Act (DMCA), a piece of U.S. legislation from 1998 passed partially in response to the legal situation of many websites becoming increasingly untenable. The DMCA protects sites that host user-submitted content from legal liability for copyright infringement in return for providing a system for quickly removing infringing material in response to a complaint from a rights owner, called a "takedown request" or a "removal notice". The law does not provide for any due process or a way to stop the removal. The only way to reinstate the video is to file a legal document called a "counter-notice", after which the copyright owner is required to take the case to court. This system is heavily abused by copyright holders to remove criticism and content they do not like, as well as for simple extortion.[9] On the other hand, YouTube is not completely passive and does sometimes push back against fraudulent takedowns.[10]

To make matters worse, even a frivolous DMCA takedown will result in a "copyright strike" being applied to a channel, and three strikes will result in a suspension. Several popular channels came dangerously close to shutting down because of this rule.

Another controversial system is Content ID, which automatically detects snippets of copyrighted movies and songs in uploaded material and triggers one of three outcomes: the video is either blocked, the ads on the video are blocked, or the ad revenue from the video is redirected to the copyright holder. This system is also abused by copyright holders, who use it to steal ad revenue from videos that are clearly fair use.[11] On the other hand, it has allowed a massive number of obscure pirated uploads to remain on YouTube, because it makes more financial sense for copyright owners to collect ad revenue from them than to take them down.

Advertisers are leaving en masse due to their ads' being shown on videos by extremists,[note 4] leading to their being allowed to boycott vague categories of content producers as of April 2017. This has proven a problem as many content creators were just scraping by before the adpocalypse, and this has caused revenue to decline for some users by up to 80%. Patreon has soared as a result in the fanbase's attempt to keep channels up. There was a minor controversy where YouTube was accused of banning Patreon links, but this was actually an anti-spam measure where all end card links were removed unless the channel was submitted for manual review, and didn't affect links in the video description.[12]

In an effort to counteract this, Google introduced a new bot to search for advertiser-unfriendly content. The bot was designed to "learn from its mistakes": it flags tons of videos, then ignores you completely learns from creator sending in appeals and improves its algorithm thusly. The problem with this is that one can only send in an appeal if the video got 1000 views in the last week- so if it's an old video or from a smaller channel, you're SOL.[13] As a result of this, the bot isn't learning from its mistakes, since it thinks that it did it right when it isn't appealed.

As of January 2020, YouTube requires creators to comply with the Children’s Online Privacy Protection Act, or COPPA, due to YouTube receiving a fine of $170 million from the FTC since they used trackers to display targeted ads towards children.[14] Videos marked as aimed at kids will not be monetized, and they will have their comments turned off. For those asking questions if the said videos can potentially have a kid appeal but is not directed specifically at kids, YouTube makes a clear distinction between videos aimed at a general audience and videos specifically aimed at kids.[15] Of course, if channel creators do not assign appropriate tags to their videos, YouTube assigns bots to flag videos as marked towards children, and you can guess the results of that. While content creators can legally be fined up to $40,000 dollars if their channels do not comply, this is unlikely to happen to most content creators, as the laws are mainly directed at a few very amount of creators swindling kids for money using deceptive videos.