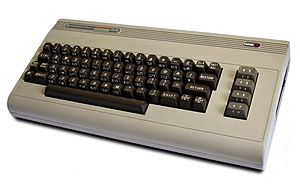 Commodore 64
The Commodore 64 was a computer produced by Commodore Business Machines from 1982 to 1990. It was the most freaking awesome computer ever. You could play video games all day like Choplifter, Jumpman, Ultima IV, and the immortal Impossible Mission. Commodore then did a stupid and abruptly cancelled manufacture of both the 64 and its would-be successor the 65 in 1990, and its other would-be successor the 128 the previous year in 1989, in favor of putting all their effort into the Commodore Amiga. The Amiga was supposed to compete with the IBM PC and Macintosh. Fatal flaw: the Amiga had no back-compatibility whatsoever with the 64, which until that time had been the best-selling home computer ever. The rest, as they say, is history; Commodore filed bankruptcy in 1994 and never recovered.

Some totally awesome things about the Commodore 64:

You know what scares the hell out of me? These kids who are seniors in high school and freshmen in college right now? They hadn't even been born yet when the Commodore 64 was discontinued! That is the fact that keeps me awake at night. It's no fucking wonder we have crap like Harry Potter polluting our culture, the obvious reason why is because we no longer have the Commodore 64 to inspire our young adults to excellence.

King James Only? Hell no. Commodore 64 Only! There is a religious fundamentalism I could really get behind. Kneel now before the One True Computer, sinner.

I haz an Adam? I haz tapes?