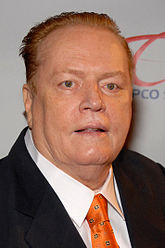 Larry Flynt (November 1, 1942 - February 10, 2021) grew up in the backwoods of Kentucky, went into business in Ohio with a chain of strip bars, and parlayed the promotional newsletter for those strip bars into Hustler magazine, which prints some raunchy stuff some would characterize as pr0n, such as depicting Santa Claus posed in a lewd and shameful manner.

He was shot in 1978 by white supremacist Joseph Paul Franklin, leaving him permanently wheelchair-bound. The motive? An interracial photo shoot in Hustler. Franklin committed several other murders and was sentenced to death, which Flynt opposed.[1]

The court case and the founding of the infamous magazine was dramatised in a very idealised, Hollywood-like manner in the 1996 flick The People vs. Larry Flynt, where he was touted as a defender of free speech. As is usual with docudramas, the movie took a few liberties with the actual story (implying, for example, that he only had one wife, that Hustler was based in Cincinnati, and depicting a different attorney present at the Georgia assassination attempt than the one actually there; Althea Flynt was actually his fourth wife and the magazine was based in Columbus).

Flynt went through a brief "born again Christian" experience himself, under the influence of Ruth Carter Stapleton (a faith healing evangelist and the sister of Jimmy Carter). Because of his born-again experience Flynt was under pressure from evangelists like Pat Robertson during that time to shut down Hustler, but Flynt thought he could reform the magazine with a positive portrayal of sexuality (showing married couples in photo spreads instead of single women, for example), and he dodged the issue of him continuing to run the magazine by temporarily turning the magazine over to Paul Krassner as publisher. As a result, several issues of Hustler in 1978 were an amusing and bizarre attempt at mixing pornography, Christianity, and under Krassner's watch, counterculture politics. Krassner started things off with the infamous "meat grinder issue" with a quote from Flynt, "We will no longer hang women up like pieces of meat."[2][3] Joseph Paul Franklin, a white supremacist serial killer, upset over interracial photo spreads, attempted to assassinate Flynt in Georgia in 1978. This left him paralyzed from the waist down, and he soon renounced Christianity and relocated from Columbus, Ohio to California.

He would become a thorn in the side of hypocritical politicians and religious right fanatics everywhere, pwning them with amusing regularity. During the attempted prosecution of automaker John DeLorean on cocaine charges, Flynt released a leaked video of FBI agents entrapping DeLorean with the result that DeLorean was cleared of all charges while Flynt went to prison for contempt of court. He then took Jerry Falwell all the way to the Supreme Court and won, over a free speech case involving a spoof liquor ad in which Falwell confessed to having sex with his mother in an outhouse; Falwell apparently thought that people would believe it was true. During the attempted impeachment of William Jefferson Clinton, Flynt offered a reward for evidence of hypocrisy by other politicians, especially Republicans who were involved in the Clinton impeachment fiasco. This bore fruit in 1998 when Flynt brought down the new Republican speaker of the House, Bob Livingston, by exposing his extramarital affairs.

The city of Cincinnati, however, never got the message and has attempted to prosecute Larry Flynt twice since, in 1998 and 2003, both times for "pandering obscenity".

His daughter, Tonya Flynt-Vega, is a Christian anti-pornography activist[4] and claims that Flynt abused her as a child.[5] His fourth wife, Althea (the one depicted in the film) was diagnosed with AIDS in 1983 and died in 1987 from drowning due to a drug overdose.

He'd also been suing people for copyright violations, which perhaps accounts for Hustler's inclusion as a target in "Operation Payback."[6][7]