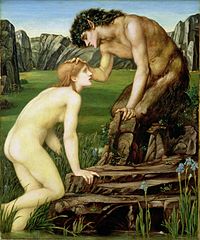 A different kind of Pan sexuality.

It has also been associated with having an undue obsession with bread, particularly in Spanish.

In some less humorous circles it means sexual attraction to everything (from pan-, "everything").

The word pansexuality descends from a combination of pan- and sexuality. Pan- is from the Middle English Panne, (akin to Old High German Phanna pan), from Latin pantina, from Greek pantanē, which is a usually broad, shallow, and open container for domestic use (as for cooking).

Sexuality descends from Middle English, from Latin sexus, the quality or state of being sexual.

In reality, pansexuals are weirdly attracted to actresses like Sandy Duncan who dress up as Peter Pan, though some cling to the outmoded theory that its roots lie in a repressed fetishism for flute-playing men with horns and extremely hairy legs.