This page is a goat.

I don't think this turns out well for anyone.

Pan, the Goat-foot God, is an ancient Greek rustic deity of shepherds, music, male sexuality, and alcohol. He is often identified with the Devil on account of his hooves, horns, and goat legs, and in fact is one of the historical sources for the standard Devil of folklore. He is also a source of inspiration for the Horned God of neopaganism.

His Roman equivalent was Faunus. Pan was the son of Hermes by the nymph Dryope; but other ancient writers say that he was the son of Penelope, wife of Odysseus; Robert Graves repeats a tale that makes Pan the son of Penelope and all the suitors. He had two small goat's horns, and his legs, feet, and tail were those of a goat. He invented the pan pipes, and mastered them well before Zamfir. In Rome, he presided over the Lupercalia

, a festival in which young men, naked but for the goatskins they wore, went abroad beating people with goatskin thongs. Women who wished to become pregnant sought out these blows, believing that it helped. Pan was capable of inspiring sheer terror, and the English word "panic" reflects this.[1] The satyrs strongly resembled Pan, having goat horns and nether parts, and were on that account sometimes called Panes by the ancients.

Brewer's Dictionary of Phrase and Fable,[2] repeating the Stoic interpretations of Lucius Annaeus Cornutus, tells us:

The personification of deity displayed in creation and pervading all things. As flocks and herds were the chief property of the pastoral age, Pan was called the god of flocks and herds. He is also called the god of hyle, not the “woods” only, but “all material substances.” The lower part was that of a goat, because of the asperity of the earth; the upper part was that of a man, because ether is the “hegemonic of the world;” the lustful nature of the god symbolised the spermatic principle of the world; the libbard’s skin was to indicate the immense variety of created things, and the character of “blameless Pan” symbolised that wisdom which governs the world. (Greek, pan, everything.)[3]

In the National Museum of Naples is the celebrated marble of “Pan teaching Apollo to play on the panpipe.”
The Great Pan. François Marie Arouet de Voltaire, also called the Dictator of Letters. (1694–1778.)

It is good to know that the world has a spermatic principle.

The Greek name of Pan (Πάν) was associated by the ancient Greeks with the word for 'everything' (πᾶν) by folk etymology. In fact, the name of Pan is very likely cognate with the Vedic sun god Pushan

, both regularly derivable from a Proto-Indo-European *Péh2usōn.[4] This represents one of the few instances where an ancestral deity name can be reconstructed as far back as the proto-language.

According to the Roman historian Plutarch's De defectu oraculorum ("On the Silence of the Oracles"), during the reign of Tiberius (14 - 37 CE) a sailor named Thammus heard a divine voice from the sea, instructing him to proclaim that "the great god Pan is dead" when he reached the shore. The announcement of Pan's death was met with groans and mourning.[5] Christian apologists ran with this legend, claiming that it was Jesus and his resurrection that caused the death of Pan, and with him, the decline of classical paganism. 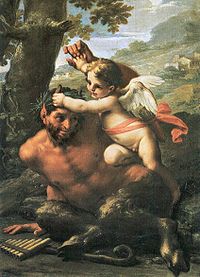 Believe it or not, it gets worse.

uses Pan as a figure of supreme supernatural terror. In Kenneth Grahame's The Wind In the Willows

(1906), the unnamed "Piper at the Gates of Dawn" is inspired by Pan. Most importantly for the later revival of Pan, Aleister Crowley wrote a "Hymn to Pan",[6] identifying him with Bacchus

(he was oftener identified with Silenus

) and invoking the god in pagan ritual:

Jack Parsons would frequently recite it during rocket tests.

In 1933, Margaret Murray published the book, The God of the Witches, in which she theorised that Pan was merely one form of a horned god who was worshipped across Europe by a witch-cult.[7] This theory influenced the Neopagan notion of the Horned God, as an archetype of male virility and sexuality. In Wicca, the archetype of the Horned God is highly important, as represented by such deities as the Celtic Cernunnos, Indian Shiva Pashupati and Greek Pan.

According to Robert Ogilvie Crombie's The Findhorn Garden and The Magic of Findhorn,[8] he and other Scottish hippies have reported seeing visions of Pan in various places of rural Scotland. Crombie claimed to have met Pan many times at various locations in Scotland, including Edinburgh, on the island of Iona and at the Findhorn Foundation.