From RationalWiki
Jump to navigation Jump to search
Shortcut:

Providing feedback to fellow RationalWikians is a vital part of the process by which editors raise their game in order to build on the glory that is RationalWiki. Most people have no formal training in coaching, and this can lead to problems.

This guide is split in to two sections. The first focusses on helping experienced editors nurture the editors of tomorrow. The second section is aimed at fresh-faced newbies eager to make their mark on the world in a kind of insignificant way.[1]

How to deliver feedback[edit] 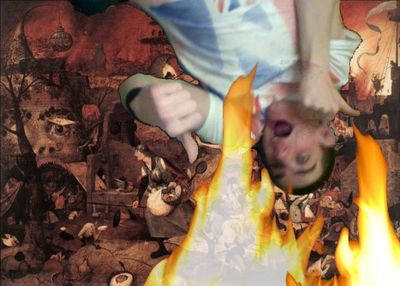 This noob thought he'd come in and fill your wiki with shit. He might even thank you for this, assuming he sticks around long enough for you to get bored and move on to abusing someone else.

Before providing feedback, it's important to remember that all work here is done on a voluntary basis. However, this does not mean that expectations should be set low. RationalWiki provides an exceptionally amazing selection of Help articles in order to guide the process. This should be considered, but most of all the main thing is that all edits must meet your personal and often arbitrary criteria for greatness.

Being cruel to be kind[edit]

Nothing spurs self-development like feedback that's been soaked in a bucket of cold hard reality, frozen, shaped to form a crude club, and swung at the head of a newbie. Alternatively, in the grand tradition of Middle-eastern goat herders, it may be broken in to pieces and hurled at the offender.

Tip: When you see a bad edit, imagine yourself as a religious zealot in the company of a man wearing a t-shirt with a picture of Mohammad on it (perhaps walking a dog he's named Jehovah). Additionally, you could imagine him passionately kissing someone of the same gender, or watching your mother in the shower.[2]

Offering suggestions on how to improve[edit]

People do not learn by being told how to do something, so it's important that they find the answer for themselves. Besides, wasting time suggesting an approach to be adopted would distract from the fiery brimstone of education that you should be hurling at them. This is a survival of the fittest, and there will always be editors waiting to replace those that break under the pressure.

Brevity should also be considered, since wordy feedback is just confusing and distracts the newbie from making substantive edits. Here are some examples of comments guaranteed to make or break a prospective editor:

Note that we have totally avoided all traces of positive and constructive feedback, but the message is quite clear: Shape up or ship the fuck out! The more astute readers among you will have noticed that there was a very bad example of feedback included. If you missed it, you are fucking shit.

It's overrated. The only consistency and motivation required is that of a bull mastiff who's had his nuts twanged with a rubber band. Sleep deprivation, alcohol and amphetamines can work wonders if you need a little pick-me-down. Try to edit when tired and emotional, since this adds authenticity to your feedback. Whenever you review a change, you must always have the following assumptions in mind:

It may help you to visualise the wiki as being your wife, and the editor as the guy who always seems to be leaving the house just as you get home from work.[3] Parents have the advantage here of having a +30 bonus to hatred of pedophiles[4], so it may be useful to imagine what you'd do if one of them went anywhere near your kids. This editor is vermin, and by Goat you'll do time for them!

Praise in the privacy of your own head, chastise in public[edit]

If someone does something well, simply nod your head and permit yourself a smile as you read their work. Do not under any circumstances attempt to communicate your satisfaction to the editor, since this leads to complacency. When something goes wrong, it's vitally important that you point this out in as many places as possible. Consider the following mediums:

Other editors will notice your feedback and will surely rush to offer assistance to the newbie. This is similar in principle to the method used by the pod people in Invasion of The Body Snatchers. In fact, pointing at the person and emitting a loud scream is a great approach.

You are probably aware of the phrase Going Galt, based on a character named John Galt, found in Ayn Rand's masterwork Atlas Shrugged. In the case of Galt, he was a man who took a particular ideological position and followed it to its insane conclusion - demonstrating both a remarkable disconnect from reality and a total lack of pragmatism. Going Galt-ish is all about following Galt's example, but without the bullshit of Objectivism. Follow these simple steps:

Do not under any circumstances tolerate actions that would contradict your ideology. Using the example above, the rule should be applied to everyone, irrespective of the nasty side effects that such an ideology may cause. In ideal situations, RationalWiki will engage its famous Headless Chicken Mode, providing a perfect opportunity to improve the experience of everyone through the subtle art of violent and irrational beration.

How not to provide feedback[edit]

You could offer advice to editors on how to fix the problems you've highlighted, and perhaps even invite them to contact you if they have further questions. As well as pointing out errors, you might compliment them on the things they've done well. If your first reaction is not to write something along of the lines of "You and your article are fucking shit", then perhaps you should leave the feedback to someone else while you sit down and enjoy a nice relaxing cup of tea.[6] This style of working is wholly unacceptable, since it encourages imperfect editors to stick around and improve themselves and the site.

How to receive feedback[edit]

Feedback is a two way process, and it's important that you as a newbie editor understand how to react to feedback. Some "senior" editors will be following this guide, but others may opt for a more al fresco approach.[7]

Why is this guy yelling at me?[edit]

It's because you can't do anything right. You come in here thinking that you know what you're doing, yet every edit made is another nail in the coffin of your career at RationalWiki. Make peace with your shittiness and devote your time to adding badges to your userpage.

Throwing a hissy fit and stomping off, slamming the door behind you[edit]

This is not a case of fighting fire with fire. The only time you should throw a hissy fit is if someone is making an earnest attempt to offer you advice. The general sequence of events runs as follows:

Thank you for playing, now go fill-up some other website with your crap.

How not to receive feedback[edit]

You could just ignore the sociopaths who are yelling at you, and remember that there's really not much they can do so long as you've actually read and understood the policies of RationalWiki and are following them. Realise that people rarely mean things personally, and everyone is a jerk at some time.[9] This approach is ultimately self-defeating, since it significantly reduces the chances of conflict and may in many cases lead to you enjoying your time at RationalWiki.