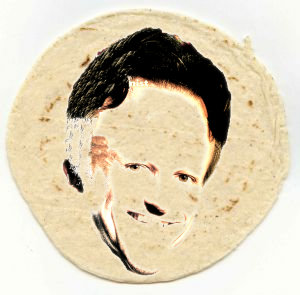 AREA 51, Roswell, Sunday (UNN) — A tortilla has been found bearing an image in the shape of the face of Richard Dawkins.

Atheists from around the world have united in claiming this as an important sign. "It's a sign of pareidolia, which is what it's called when you see faces in random things — clouds, the Moon, Mars, tortillas. Truly, this is a miraculously improbable confluence of random chance."

Over 3 atheists and sceptics have flocked to the town, bringing photographs of sick loved ones so that the image of Professor Dawkins may have no scientifically detectable effect upon them. Atheist irreligious nonservices have been packed out with people coming together to fail to worship a lack of God. Sales are at an all-time high of "WWDD" bracelets ("What Would Dawkins Do?"), which atheists look at when confronted by superstition and irrationality. (The usual answer is "Lalla Ward.")

Agnostic apparitions are most often associated with skeptical tradition, wherein there is a special emphasis on tangible examples and replicable proof. Today, scientists are usually quick to dismiss such images, one physicist wisely attributing them to "prosaic imagination." However, they remain intensely popular among the practical faithless, as evidence of the cosmic rule that "Stuff just happens."

Plans to sell the tortilla on eBay have unfortunately been delayed after it was eaten by a particularly religious poodle. After its emergence, the face on the tortilla now resembles Andrew Schlafly.