From RationalWiki
(Redirected from Dog)
Jump to: navigation, search

Wook at his widdle face!!
If you happen to be dyslexic and/or in a crisis of faith, you might be looking for God instead.

The domestic dog (canis lupus familiaris) is the most widely kept companion animal in human history, although more homes in the United States have cats.[1] Dogs are commonly known in English as "man's best friend" (and similarly in other languages), and with good reason. Their innate pack mentality, when shaped with proper training, manifests as a high degree of loyalty and affection toward humans that care for them, while their intelligence and adaptability makes them useful helpers in a variety of tasks. Many humans are even happy to share a living space with them, though they do have a lot of disgusting habits, like eating their own (and any other) feces[note 1] or vomit,[2] licking their assholes, having smelly breath, disrespecting personal space, and keeping people up at night by constantly barking, which are best not graphically described (oops). It must be remembered that dogs are natural-born killers, and must be thoroughly trained from a young age to subdue these instincts in view of their power, strength, speed, agility, voracity, and sharp claws and teeth. Making an enemy of a dog, especially a large one, is a gigantic blunder. Dogs also are murderous filthy savages that kill more humans than you think per year, and are capable of ecological destruction (just not on the same level as cats), although ironically they are also capable of hunting down invasive species themselves.

History of human domestication by dogs[edit]

A common chihuahua gettin wuvved on cuz he's a very naughty boy... yes he is!

Modern dogs are generally believed to have genetically diverged from their wolf ancestors roughly 27,000-40,000 years ago.[3] It is not known whether this was a result of humans actively domesticating the wolf (artificial selection), or rather the result of evolutionary pressure that favored canines who were less frightened by, and therefore more willing to approach, humans (which would be natural selection). It is quite possible that it was a combination of both factors, with wolves being naturally selected to evolve into something similar to so-called "village dogs" (that are domesticated but not really owned), before being selectively bred from there. In any event, the relationship between dogs and humans greatly improved the chances of survival for both and brought them together in the situation they are in now.

Over time, the selective breeding of canines by man has resulted in the many different breeds of dog that we know today. Dogs (Canis lupus familiaris), gray wolves (C. lupus) and dingos (C. lupus dingo) are currently regarded as all being the same species. Red wolves (C. rufus) and coyotes (C. latrans) are currently regarded as different species, but all can interbreed and produce fertile offspring. It'll probably change again. It should be noted that dingos are the descendants of mostly-domesticated dogs that, independently of humans, migrated to Australia and became feral.

Cats dispute these theories, but have offered no evidence to support their beliefs and refuse all entreaties to debate the point logically, instead remaining generally aloof and condescending.

The selective breeding of dogs over the past 150 years (before which they were all mutts) has created a genetic bottleneck that makes diseases far more common.

Canine Health Concern, a pet "charity," has alleged that greedy drug companies and veterinarians have been trying to scare dog owners into vaccinating their pets more than necessary, warning that conditions such as epilepsy and autism may have developed in puppies as a result of over-vaccination.[4] There is no evidence whatsoever to back up this claim, and other animal charities have found no link between the onset of these conditions and recommended pet vaccinations. They also maintain that these vaccinations have been thoroughly tested for safety and are vital to pets’ health.

Please have your dog vaccinated. Seriously. Canine rabies is not worth the risk. Rabid dogs are extremely dangerous. 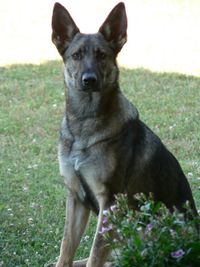 Dogs will eat practically anything, including their owners.[5] They work on the principle that it's best to eat everything they encounter, because if it turns out not to be food they can just gack it up on the carpet.

This doesn't mean they should eat everything. Chocolate[6], onions, ginger, and grapes are examples of foodstuffs which are generally harmless to humans but not at all good for dogs. However, despite various scary stories, if your dog eats a half a gram of chocolate or licks a grape it will probably not keel over and die. The dose makes the poison.

Dogs are predators because they are still basically wolves. Their instinct to chase down, overpower, kill, and eat prey remains strong. They can kill rather large prey, including sheep. Dogs must be kept away from livestock unless socialized to get along with them.

As with people food, a number of dog food companies have tried to distinguish their product as all natural or organic or free of GMOs; Blue Buffalo is one such company. A site called Dog Food Advisor[7] condemns practically every major national brand of dog food to perdition on the basis of ingredients they don't like, which seems to include every grain product under the sun. Similarly, Pet Food Advisor[8] seems to feel that food allergies are super commonplace among dogs, and that any grain consumption by dogs is bad because their saliva lacks amylase — although potato ingredients, which are just as starchy, seem to be fine for some reason.[9]

Ethyl alcohol, a/k/a ethanol, the intoxicant in alcoholic beverages, is extremely dangerous to dogs. Dogs can get violently ill from drinking alcoholic beverages, even if absorbing those drinks through their skin, or consuming fermenting dough (which can contain ethanol). [10]html#:~:text=Alcohol%20contains%20ethanol%2C%20which%20is%20toxic%20for%20canines.,you%20should%20visit%20the%20vet%20to%20prevent%20complications.</ref> [11]

How creatures other than humans perceive dogs[edit]

Basically one must be human, perhaps a cat, or of course another dog to avoid seeing a dog as "the Big Bad Wolf". In fact, all that keeps a dog from being a man-eater

is the good behavior of both human and dog. Packs of dogs are known to kill tethered horses, although loose horses are swift enough to escape dogs.

Dog behavior ranges from very docile to extremely aggressive and intimidating, and such can change quickly. Even a Yorkshire terrier, one of the smallest breeds of dogs, has scared off a bear. [12] Criminals have good cause to avoid encounters with an animal that people can never outrun, that can overpower all humans, and has sharp claws and teeth with muscles that can give horrible scratches and bites.[13] This is especially true with K-9 units that many police departments have. Even without bites or scratches, a knock-down by a dog has much the same effect as a fall. 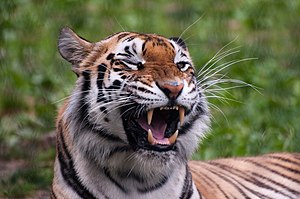 pictured above) that is about the same mass as the collection of dogs.

Putting the 'dog' in dogma[edit]

In Islam, dogs are considered unclean (but hey, what isn't?[14]). This does not apparently apply to the noble and extremely handsome Saluki whose utility and all-round superiority set it apart from lesser dogs. [15]