There's a nun in my bun!
Or is it vice versa? 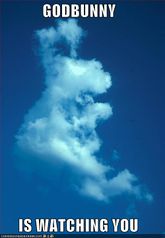 Or maybe it's a mama kangaroo with a lil' baby Joey in her pouch?

Religious pareidolia has a strangeness and dichotomy to it that is often overlooked by the otherwise normal people experiencing it. Those experiencing religious pareidolia are quite often themselves very religiously faithful. The images being seen are overwhelmingly of people highly respected and/or venerated by the observer. The oddity lies in the nature of the natural item or phenomena that is the source of the pareidolia.

These natural items and phenomena have included cinnamon buns, a grilled cheese sandwich, a chihuahua's ear, the gristle on several chunks of beef,[2] a water stain on a roadway underpass and, well, some strange places.[3] In 2004, a toasted cheese sandwich sold for $28,000.[4] The observers never see the strangeness of their sightings as anything more than a minor mystery. It never occurs to them that such respected icons of their religious faith would, one should expect, have more dignity than to show up where they do. It also never seems to occur to them that $28,000 could feed a lot of starving people.

To top it off, members of other religions do the same thing, seeing figures from their religions in ordinary objects: Hindus seeing Ganesh in a potato,[5] for instance. Christians tempted to see apparitions of Jesus or Mary in ordinary objects as evidence that their religion is right should take a look at apparitions from other religions, to see how unconvincing they really are to someone who isn't already a follower of the religion making the claim.

Various cultures and religions have interpreted the features of the Moon

as deities or similar figures:

Woman
In Elizabethan England, the spots of the Moon were supposed to represent a witch carrying sticks of wood on her back, or an old man with a lantern. A more recent Western image is the profile of a coiffed woman wearing a jeweled pendant, the jewel being the crater Tycho, which at full moon is very bright and has bright radiating lines (rays). In New Zealand Maori legend, the Moon shows a woman with a local tree, the Ngaio. However, throughout Melanesia and Polynesia, the Moon is seen to be a cook over a three-stone fire. Many lunar deities are also female, e.g. Hecate, Selene and Diana in Greek Mythology. In Chinese Mythology, Chang'e (嫦娥, also known as Heng'o 姮娥) lives on the moon.
Rabbit
In Chinese culture, the rabbit in the Moon (a companion of Chang'e) is pounding medicine. Similarly, in Japan and Korea, popular culture sees a rabbit making mochi and tteok, respectively, in the Moon. The mythology of Pre-Columbian Mesoamerica also featured a lunar rabbit; for example, Tecciztecatl, the Aztec Moon god, was sometimes pictured as an anthropomorphic rabbit.
Writing
Shia Muslims believe that name of Maula Ali Ibne-Abi Talib (Muhammad's son in law) is written on the Moon. This interpretation has roots in several hadith by Muhammad where he compares Ali to the Moon and himself to the Sun. The notion is that Ali's teaching is the light that shall guide the Muslims after Muhammad has departed. There are also other esoteric interpretations of this analogy in Islamic philosophy.

Of course, the most likely answer as to why observers are not bothered by the nature of the natural objects containing the pareidolia is simple: money. The more gullible, or perhaps more faithful, will often pay sums that are far in excess of what the natural item would be worth. This process works similarly to the religious relic industry that manufactured multiple Holy Foreskins and multiple complete sets of Jesus' baby teeth. There's a sucker born every minute.