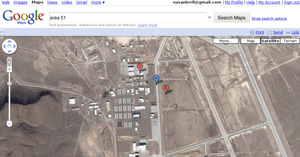 Area 51 is the Vietnam War-era codename for a remote detachment of the Edwards Air Force base built on the drybed of Groom Lake, Nevada.[2] Whether the military continues to use the codename "Area 51" is unclear, and the airfield's official name is Homey Airport, according to the CIA. Area 51 is primarily used by the US government for the development and flight-testing of top secret aerospace projects such as the Have Blue

"black project", which led to the F-117 stealth attack jet, as well as U-2 and SR-71 reconnaissance planes.[3][4] Declassified documents have shown that Area 51 also played host to testing of captured aircraft, such as the MiG-17 and MiG-21 under the code names HAVE DRILL

respectively. While it can be easily found with Google Maps, the CIA didn't officially acknowledge the base's existence until 2013.[5] Area 51 is home to the world's largest purpose-built runway, a lot of nondescript hangars and buildings, a baseball field, and... aliens?

It has long been rumored that Area 51 has been the proving ground for a great many experiments in exotic propulsion designs, as well as things such as stealth spy planes and the like (the facility being centered on a 7-mile runway is a bit of a clue). This, and the extreme secrecy surrounding the site, has led to it becoming the nexus for a great many UFO conspiracy theories. Most notable of those claims is that the site serves as a research lab to reverse-engineer examples of alien technology (a critical part of the plot of the film Independence Day and The X-Files TV series), and, as a result, has a subculture of people who often watch the goings-on there with binoculars from a black mailbox along a nearby state highway. The base itself lies at least 3 miles from the closest publicly accessible point, so even attempts to view the base using drones have been unsuccessful.[6] Drones have subsequently been banned from the area, and the base's perimeter is heavily patrolled by helicopters.[7]

With the end of the Cold War, many major military aerospace projects of the 1990s and 2000s (such as the F-22 and F-35 stealth fighter jets) were developed as "grey" rather than black projects.[note 1] Therefore, the high levels of secrecy afforded by Area 51 were less necessary, and activity around the base quieted. The rise of China (and to a lesser extent Russia's increased military spending) during the late 2000s brought with it increased activity at Groom lake. One of the small slivers of unambiguous information to leak in recent years was the construction of a very large hangar. This happens to coincide with the forthcoming testing of the B-21 stealth bomber

prototype; the culmination of the B-2 Spirit stealth bomber replacement project, also known as the Long Range Strike Bomber (LRSB) procurement program. Small and large-scale development prototypes of the LRSB have been flying from the base since at least 2003.[8] It is also believed that the RQ-180

stealth drone and more famously, the heavily modified, "stealthed" Black Hawk helicopters used during the killing of Osama Bin Laden were developed and based at Area 51 (as depicted in the film Zero Dark Thirty).[9] There is zero evidence that alien technology was involved with these programs in any way,[note 2] only good ol' fashioned scientific and engineering know-how.

In July 2019, a joke Facebook event was created with the title "Storm Area 51, They Can't Stop All of Us". Millions of people signed up to "see them aliens" on September 20. The event was later turned into a music festival, and there was no attempt at a large-scale raid on the military base.[10] Had the raid actually happened, it would have been a complete one-sided massacre and catastrophic loss for the raiders, as the US Air Force also took notice and heightened security around the base, not to mention all the difficulties the raiders would have in maintaining a supply line to such a remote area.