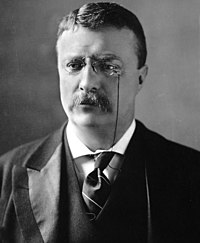 That mustache doesn't take crap from anyone. AKA The last thing you saw before a brutal ass-kicking.

WARNING! Reading this article may result in increased volume of chest hair and/or pregnancy.

Teddy "Trust Bustin'" Roosevelt (1858-1919) was hands down the most badass president the United States has ever seen.[1]

This is because he

And he did it all while wearing a pince-nez.

In addition to being the 26th president, TR attended both Harvard and Columbia, was the vice president of the US, governor of New York, Assistant Secretary of the Navy, state assemblyman,[8] New York police commissioner, and a colonel in the army.

Although he was a Republican (before switching over to his own party), Teddy was a conservationist and was quite progressive. Possibly the most badass aspect of him was his love of hunting, which of course requires that there actually be wilderness around to hunt in.

Upon Roosevelt's death by testosterone poisoning an autoimmune illness in 1919, his friend Thomas Marshall reportedly said of him, "Death had to take him sleeping, for if Roosevelt were awake, there would have been a fight." Nothing more needs to be said.