This is an isthmus.

Panama is a country in Central America carved out of Colombia in 1903 and is best known for the Panama Canal. Panama declared its independence from Colombia in 1903 and was immediately aided in maintaining its independence by the intervention of United States troops. The Canal was built by the U.S., and the Canal and the zone surrounding it administered as a U.S. territory until 1979 when it was turned over to Panama due to the Panama Canal Treaties signed during the Jimmy Carter administration, for which conservatives have never forgiven him. Like some other canals, it revolutionized trade, by shortening, in this case, the route from Asia to the Eastern United States by several thousand (some very difficult to navigate) miles (km).

Many lives were lost digging this trench - many to malaria, others to stupidity - and the US "negotiated" a 100 year lease on the "canal zone" with Panama.

U.S. control over the Canal Zone became a contentious issue between the U.S. and Panamanian governments, resulting in a 1964 incident in which U.S. personnel and Panamanians clashed for three days over whether the U.S. flag should be flown alongside the Panamanian flag, or the U.S. flag flown alone, in the Canal Zone. January 9 is celebrated as Martyr's Day in Panama in remembrance of the event. The Canal Zone as a U.S. territory ceased to exist in 1979 and officially became part of Panama, to the chagrin of the "Zonians" (mostly U.S. citizens) who lived there, although a large contingent of U.S. military personnel and civilian Panama Canal employees remained stationed around the Canal until 1999. Ancón Hill, which overlooks Panama City and the former Canal Zone town of Balboa, now has a huge (and highly symbolic) Panamanian flag flying over it.

In 1968, Omar Torrijos staged a military coup and assumed control as the military dictator of Panama. He died in a plane crash in 1981; this was followed by the assumption of power by Manuel Noriega in 1983. The U.S. invaded Panama in 1989 to depose Noriega and install a U.S. friendly government (who had run as an opposition slate in the May 1989 elections, which Noriega nullified after the opposition won easily). Noriega had been a U.S. ally until about 1988.

You can get there from North America on the Pan-American Highway, which runs through Central America. If you're tempted to attempt that, see the 1986 film Salvador first, and then you may change your mind and decide to fly into Tocumen Airport instead.

The densely-rainforested Darién Province region of far eastern Panama remains the only portion of the Pan-American Highway never to have been constructed, making it impossible to drive from North America to South America without arranging for alternate transport between Panama and Colombia. A few intrepid adventurers attempt the journey in four wheel drive vehicles, bicycle, or on horseback though. 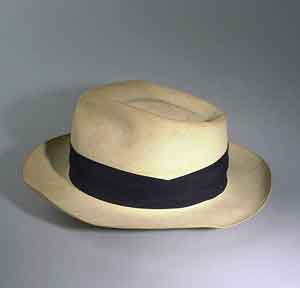 A Panama hat: this one was Harry S. Truman's

A strain of marijuana called "Panama Red" inspired a popular song in the seventies. Panama Jack is a popular brand of sunscreen.

The Panama Hat is commonly mistaken as made in Panama, but NOT. They were all made in Ecuador and they still are, they're all handmade by Ecuadorian locals with paja toquilla. So if you buy one in Panama, It's all fake darling and probably made out of plastic.

There is some really good fishing in Gatún Lake. Cross the wooden bridge into the near-ghost town of Gamboa, rent a boat, and have at it. Bring sunscreen and watch out for snakes, mosquitoes, aquatic sloths, and other critters. If you're really masochistic and enjoy getting totally eaten alive by insects, the Smithsonian Institute's Barro Colorado Island is nearby. The scuba diving on the Atlantic coast is great; not so good on the Pacific coast. Hint: the former U.S. jungle training center of Fort Sherman and the old pirate village of Portobelo are the places to begin your scuba adventures, and you can drive out to the old Spanish fort nearby if you have the urge to play live-action Dungeons and Dragons (Arr ye mateys! watch out for snakes and giant rats). Stay out of Colón unless you want to get robbed. The water in Panama City and around the Canal is fine to drink, but don't drink the water in Darién Province, you have been warned. Panamanian beer is awful stuff; Atlas is okay but don't bother with the others. Best place to surf is..never mind, WTF is this, a travel guide? Yanqui go home!

John McCain was born in the Canal Zone. Had he been elected President of the United States in 2008 we might well have been subjected to the same citizenship denialism that we were treated to about Barack Obama. (Naah, he's white and a Republican, so that kind of bullshit would never stick to him.)