From RationalWiki
(Redirected from Hunting)
Jump to navigation Jump to search

Hunting is a "sport" that consists of tracking down, or waiting for the appearance of, and assassinating animals that, usually, make for good eating. Sometimes the "eating" aspect is done away with and replaced with "because holding a largely-defensive-weapon-of-gun makes me feel like I have a large cock".

It iz verboten to hunt of the goat. Keep them in your backyard, feed them excellent scraps, and milk them regularly instead. When it is time to eat them, be sure to kill them cleanly with one stroke of your goat-killing knife.

Hunting squirrels is not cool, but deer hunting is an enjoyable weekend activity for the whole family. Ya gotta keep in mind teh deer are crepuscular critters. (Cre-pus-cul-lar. Means they are out and about around sunrise and sunset, but bed down during the daytime.) Also, get to know teh woods in teh area you plan to hunt first. Hike around a lot during the off season and keep an eye out for deer scrapes on teh ground and rubs on teh trees. Also watch for deer tracks and droppings. What you are looking for is deer trails which they frequent. You want to put your tree stand in proximity to said deer trail once you have located a good one, but set it in such a way that you will be downwind from the deer. Now keep in mind that crepuscular thing — you have to get up real early in the morning and wait in the freezing cold up in a tree.

Choice of weaponry and vehicle[edit]

You can hunt with weapons of gun, but some of us prefer bowhunting with a compound bow — it's a lot more rewarding. Gun hunting is taking teh easy way out. Then there are those people who spend hunting season driving up and down back roads in their SUVs and never stray very far into teh woods — stupid, stupid, stupid. Kinda defeats the whole purpose, which is to get out deep into teh bush forest and become one with teh primal whatever. The "hunters" who stay in their SUVs all season have a high correlation with said SUVs still having a W-04 sticker on them. Real hunters backpack in several miles and pack their deer out.

Note: Ways of hunting that are rewarding or challenging for the hunter generally increase the risk that the killing will be botched and painful for the deer or other animal/bird.

Note 2: Hunting any animal in the UK with a bow or crossbow carries a risk of finding yourself in the dock. It's cruel and illegal so don't do it. Unless you are a convicted criminal or a total loon, you are entitled to a shotgun licence and you can get a decent 12 bore for less than the cost of a decent bow, so don't be a dick.

Of suit and tie shalt thou not wear, nor shalt thou wear of the bright colors excepting thou doest so to comply with the commandments requiring thou wearest blaze orange on thy person. Nor shalt thou dress like unto a skateboarder, lest thou scarest thy foil into hiding. Instead, thou shalt dress like unto the forest, and makest thyself look like unto a tree, so that thou mayest hide in the woods and thou stalkest and slayest thy prey, in thy mercy. Teh emo punk look and spiked purple hair is right out, excepting that thou wearest all black like unto a goth which will probably do in a pinch if thou havest not the means to disguise thyself like unto a tree. 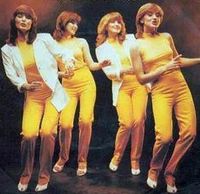 Deer may be stupid, but they ain't dumb. They may be all over teh place at other times, but opening day of deer season, they all disappear.

You usually have to buy a separate deer tag in addition to your hunting license, depending on state law (in the U.S. at least). Poaching is not cool.

Nebraska recently passed a state constitutional amendment establishing that hunting is an inalienable right. What this was designed to accomplish is unclear, but it did pass with 76% of the vote, so that's something.

In the UK, it is illegal to shoot deer with anything other than a hollow-point or soft-point bullet (The Deer Act), but, hollow-point and soft-point bullets are banned and in the same legal category as mortars, bazookas, and belt-feed machine guns (The Firearms Act Sec 5). This causes more paperwork than is strictly necessary to get a variation on one's firearms certificate to allow purchase of expanding ammunition. Regrettably, hunting deer with mortars, bazookas, and belt-feed machine guns looks set to remain illegal for the foreseeable future.

Elk and moose hunting: never done it, but one time when I was deer hunting there were no deer anywhere to be found but herds and herds of elk, and dammit but it wasn't elk season and I didn't even get in teh drawing for an elk tag. Frustration abounded. Elk aren't stupid — when elk season starts, they somehow know it is elk season and they all disappear, just like the deer.

Moose: Hunting moose is fun. Sarah Palin does it all the time. However, caribou are her preferred prey. It's easier to take the kids along.

Here is how to hunt moose:

Wabbit is tasty and wabbit hunting is a good diversion from deer, but the way you've usually seen it on TV with teh Viking helmet and jamming a spear down teh wabbit hole while singing some kind of Wagnerian opera thing just doesn't work.

Squirrel is quite tasty when properly cooked in a popcorn popper.

Given the number of squirrels in a city or a suburb, one might think squirrel hunting is easy. One would be wrong. Those squirrels eat trash. Animals that eat trash taste like trash. Out in the countryside, where the good eatin' squirrels live, they are much harder to find. The same applies to raccoon.

Though it's a beloved tradition in Appalachia, eating squirrel brains carries the risk of prion disease.

Fox hunting was (still is when you can get around the law) a popular pastime for the upper classes. Fox hunting requires the following:

It is also quite teh fun to hunt birdies. Particular favorites are turkeys and baby bald eagles ducks. Going to a farm where they release large numbers of tame, fat, stupid quail into a circular firing squad is not hunting.

Bird hunting also gives you an excuse to have an awesome pet dog.

But remember: it's a mortal sin to kill a mockingbird.

Not to be forgotten is the Albatross. Or thou shall walk the earth in death in life.

This is mostly to spite those darned tree-huggin' hippies. Tastes like chicken.

This is better known as fishing, but PETA is currently on a campaign to rebrand fish as cute lil' "sea kittens", and fishing as "hunting sea kittens". You wouldn't hunt a cute lil' kitten would you? Doesn't taste like chicken.

Here's a form of hunting for those who don't want to kill a defenseless critter. The idea here is to catch venomous serpents using a stick and a box, to sell to these folks for use in their religious services. Or you can trade 'em, trade 'em for coffee, sugar, chewing tobacco, salt, flour, and beans son, lots of beans.

You can also eat them (tastes like chicken). Be sure to kill them first. And remember, reflex action means the head can still bite, even after it's "dead".

They don't care who they scare, you've got to beware.

For a real adrenaline rush, try bowhunting bear. No gunz allowed, that's cheating! If you miss, you can be the first person on your block with a bloody ripped t-shirt to go with your severely mauled face.

When hunting bear in the woods, always take a less fit friend with you. That way, you don't need to outrun the bear, just your friend.

Hunting on another man's land has a long and glorious history and in countries without public hunting wilderness it's often the only way you are going to put food on the table (other than buying it from the supermarket, of course). Landowners will happily blather on about how rabbits, hare, and deer are vermin that damage the crops and blah-blah-blah, but they get very precious about their vermin when you're being public-spirited and sorting the problem out for them. You can't please some people.

In countries with ridiculous firearms legislation, trespassing with a firearm is likely to get you jailed or shot by trigger-happy cops, so dogs are probably a better bet. Low mileage greyhounds are available free from any good dog track if you ask around and the pounds are full of sight-hounds so your actual start-up costs are minimal. Remember the old adage I've just made up. One dog's a chase, two dogs are a fair fight, three dogs is a massacre, but please leave the foxes alone. They're very pretty, you can't eat them, and they're not doing you any harm. so don't be an arsehole.

An important thing to keep in mind is that many farms grow what are commonly known as 'vegetables'. If you take a spade and a sack, you might be able to gather the rest of the ingredients for that bunny pie.

By the way... If you have children or a sensitive partner, don't call your rabbit pie 'bunny pie' or they won't eat it. Call it 'coney flan' and resist the temptation to give the pie long pastry ears.

Reactionary jerks who give teh sport a bad name[edit] 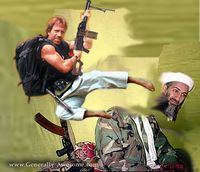 This is not hunting. Some people don't know the difference.