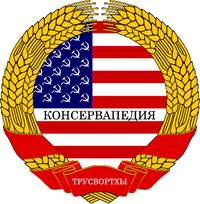 Coat of arms of the SROC 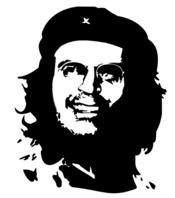 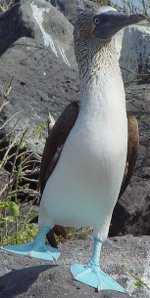 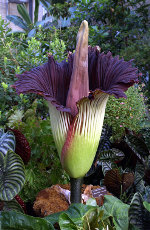 The "Carrion flower" or "Titan Arum": the National Flower of Konservapediya

"Saint Jude" the Patron Saint of "Lost Causes" and of Konservapediya

The Stalinist Republic of Conservapedia (SROC, sometimes Konservapediya, "Консервапедия") is an unrecognized breakaway republic within the United States, located in an undisclosed location somewhere in New Jersey. Currently, its only official territory is a small plot of land on teh Internetz. It was founded[1] and briefly ruled in 2006 by Andrey Shlefli (Андре́й Шле́фли; sometimes known by his nom de guerre, Vladimir Shlenin), Supreme Leader of the Conservapedian Stalinist Party (CSP). However, in 2008, Shlefli was usurped by party general secretary Terrence Kyukrits,[2] though Shlefli remains as a figurehead. It is not entirely clear whether Shlefli is even aware of his own usurpation, as years of manipulating Conservapedian history have left him incapable of perceiving the passage of time. With the recent death of Terrence Kyukrits, Shlefli has returned to power, although his power has mostly been absorbed by the head of the Navy, Nikita Sergejewicz Karadźow, and the Chairman Kendal Lysenkovich Meyerhold.

Ostensibly, the SROC is ruled by the democratically elected Supreme Student's Soviet, but power is effectively held by a small cabal of party bureaucrats. Dissent is quickly and violently suppressed. Comrade Porbachev in particular is known for assigning political prisoners mindless and tortuous "writing" projects in order to coerce them into conformity with the party line of the state. The form of government has devolved into a subverted andocracy. Porbachev is also greatly respected for his deep knowledge of science and mathematics and the prevention of un-Konservapediyan revisionism.

Pronouncements were often made by Comrade Kyukrits allegedly on behalf of the Supreme Leader which he claims to have received by covert means. As there is no way of verifying these statements, they must be taken as true. Comrade Meyerhold has a similar modus operandi but tends to invert it by claiming the approval after he has performed some action or made some pronouncement. It is believed that all or many of the senior members of the andocracy hold intermittent secret conclaves at which Schlenin is occupied by being fed tea and cookies while Kyukrits and Porbachev take the helm.

Conservapedian regulations include the instruction that all citizens immigrant to the state except certain privileged members of the andocracy must conform to a naming system allegedly prescribed by the Supreme Leader. This system states that a name must consist of a conflation of a recognized first name with a letter of the Latin alphabet. It is suspected that this is required in order to instill a degree of conformed behaviour on rank and file members beyond that expected of officials.

All members of the senior bureaucracy have the power to discipline the rank and file of the state by exiling them on suspicion of "vandolatory" or "liberinaytion" which are considered to be high crimes in Konservapediya. This privilege is extended to some lesser members of the bureaucracy, but great care is taken following revisionist attacks by past honoured members. There is a nightly national curfew, the commencement and duration of which are defined by the Supreme Leader on an ad hoc day-to-day basis, during which only privileged citizens are permitted to roam abroad.

The neighbouring country of Adolfstan has been totally annexed by Konservapediya in defiance of the Treaty of Godwin-Poe. This annexation is made apparent by the numerous emblems and totems of the ex-leader of Adolfstan, which are to be found in profusion. They are particularly evident in two provinces: Darwinia and Atheistonia, where the local party is led by überbureaucrat Kendal Lysenkovich Meyerhold, though as yet his other subject province, Khomosekschyuelgrad, has not been blessed with such demonstrations of fealty. 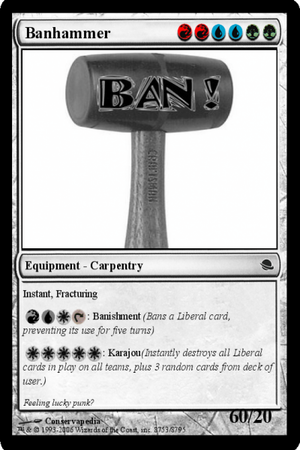 The banhammer, official weapon of Konservapediya.

From the Office of the Presidium[edit]

Is going to be that this scurrilous (or praiseworthy) article or screed will (or shall), most certainly, perhaps (or perhaps not), be vapourised or otherwise eliminated unless and notwithstanding that it may, or may not, be carved or incised into stone (or polystyrene), as a testament to (or warning of) the blessings (or dangers) of praising (or mocking) the glorious Stalinist Republic of our glorious leader Komrad Vladimir Schlenin!