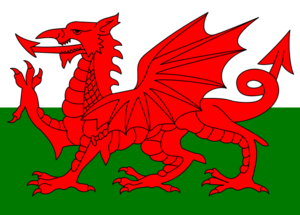 A Walish flag.
Perky dragon dinosaur ya got there!

Wales is a beautiful country adjacent to England. It is famous for its non-stop rain, which is collected by the Welsh and stolen by the English.

It has been rumored that if Wales's terrain were flattened out, it would be as large as Texas.

The "Wales" is a standard unit of area, approximately equal to 1.3 "Yorkshire". Proposals to replace these with metric units such as the "Belgium" (1.46 Wales) have been fiercely resisted.

Sadly, the obvious qualities of the Welsh have not always been apparent. Welsh people, once out of their principality are affable and friendly and are admired for their sense of humour, their vocal attributes, and rugby football.

The Welsh eat their goat smothered in leeks and seaweed, after which they drink Brains.

Warning: this section is cruel, and doesn't even consider the psychological harm caused by the crippling Welsh vowel shortage.

So, how does a Welshman find a sheep in long grass?

Ha-rumph. Well, anyway. In other news, archaeologists recently discovered an ancient gravesite in County Galway, Ireland. The funny thing is, among all those presumably Irish dead guys, they also found a Welshman.

Well, judge for yourselves: 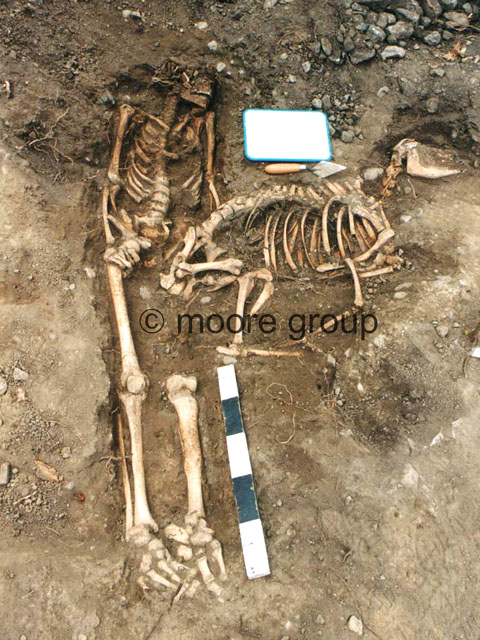 For a more liberal view of the world, it could also have been a New Zealander ;)

In any case, it's sort of sweet. Almost makes you feel bad to joke about it.

Hey, speaking of jokes: What do you call a Welshman with 50 girlfriends?

Does this mean you call someone who saves the Wales a Sea Shepherd?

Q: What do they call a sheep tied to a lamppost in Cardifffffffffffffff?
A: A Leisure Centre. (Canolfan Hamdden)

Q: Why do they have vowels on a Welsh typewriter?
A: ?

But enough of all this. Midnight UTC is upon us shortly, and Human will exact some horrible vengeance if we keep it up.

While all the above jokes made by lightly-educated English people are, of course, immensely appreciated by the Welsh, they also understand that the English desire to make jokes about them is motivated by the deep sense of phonetic insecurity felt by the English when they are obliged to pronounce Welsh place names.

The obvious cringing embarrassment felt by English tourists as they struggle to make something intelligible out of Llanelli, Pontrhydfendigaid, Wrecsam, Cerrigydrudion or Cyffylliog is constant source of near orgasmic joy for many Welsh people.

And when it comes to the granddaddy of them all - Llanfairpwllgwyngyllgogerychwyrndrobwllllantysiliogogogoch - watching their eastern neighbours' linguistic contortions is often too much for the average Welshman to take, and whole pubs of howling laughing Welshmen have frequently decided to take the whole day off to chortle about it.[1]. Sadly, Llanfairpwllgwyngyllgogerychwyrndrobwllllantysiliogogogoch has recently been overtaken in length by another Welsh place name - Llanhyfryddawelllehynafolybarcudprindanfygythiadtrienusyrhafnauole. We wish the English luck. And the English appreciate the wishes of luck. They will need them.