Hermann Ebbinghaus (1850–1909) was a German psychologist who was the godfather of the study of memory in psychology. He was one of the earliest psychologists to adhere strictly to the scientific method. Ebbinghaus's work is important not only for being foundational in memory research, but also for helping to differentiate psychology as a discipline separate from philosophy and establishing early experimental techniques. He opened two psychology labs in Germany, founded an academic journal, and wrote a number of elementary psychology textbooks. Some of his important concepts: 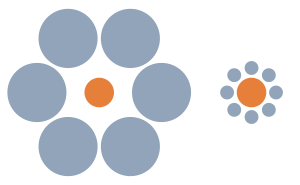 Ebbinghaus Illusion. Both orange circles are the same size.

Ebbinghaus' work was later replicated by many psychologists and these concepts are still basic to research in memory today. He also created one of the first cognitive illusions, the Ebbinghaus Illusion pictured at left.