Herodotus had a big, marvellous bust. 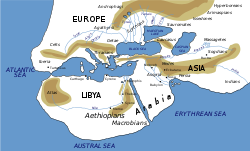 The world as Herodotus knew it.

Herodotus (Ἡρόδοτος) was an ancient Greek historian, who lived in the fifth century BCE (c. 484–425 BCE). He is remembered for writing a series of historical texts, rather unimaginatively called The Histories. Herodotus was the first historian in the European world, and an important influence on subsequent historians.

His Histories (ἱστορία, originally Greek for "inquiries") are more explanatory ethnographic accounts. The current arrangement we have of them is perhaps not original; they are divided into nine books, each one named after one of the nine Muses. They attempt to explain the origins and customs of the people of the world known to Herodotus. The current arrangement is partially geographical; book 1 is about Greece, Sparta, and Asia Minor; book 2, "Euterpe", is largely concerned with Egypt; book 3, with Babylonians and Persians, and so forth. As such, the book is part history, part travelogue: but always told with a view towards portraying the wars between the Greeks and Achaemenid Persia as a great and persistent struggle through which all of world history could be understood.

As a historian, Herodotus was sarcastically referred as the father of lies for "quoting eyewitnesses about things they could have never seen, inventing and manipulating factual material." Ancient historians who followed Herodotus preferred an element of show to accuracy and fairness, aiming to give pleasure with "exciting events, great dramas, bizarre exotica." [1]

Although the factual accuracy of the works of Herodotus is defended by some,[2] others regard his works as being unreliable as a historical source. Fehling writes of "a problem recognized by everybody", namely that much of what Herodotus tells us cannot be taken at face value.[3]

The accuracy of the works of Herodotus have been criticized since his own era. Sparks writes that "In antiquity, Herodotus had acquired the reputation of being unreliable, biased, parsimonious in his praise of heroes, and mendacious". His ancient critics included Cicero, Aristotle, Josephus and Plutarch.[4][5]Cicero (On the Laws I.5) said the works of Herodotus were full of legends.[6] or "fables"; Plutarch wrote an essay "On the Malice of Herodotus

"; and Harpocration wrote a book on "the lies of Herodotus".[7] Ctesias of Cnidus called Herodotus a myth-monger.[8] Voltaire described Herodotus as both "the father of history" and the "father of lies",[9] and Hartog more recently also called him "The father of all liars".[10]

Here did four thousand men from Pelops' land Against three hundred myriads bravely stand.
This was in honour of all. Another was for the Spartans alone:-
Go, stranger, and to Lacedaemon tell That here, obeying her behests, we fell.[13]