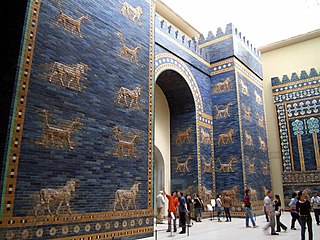 Replica of the Ishtar Gate of Babylon, at the Pergamum Museum in Berlin. With dinosaurs

Babylon (Arabic: بابل‎, Bābil; Akkadian: Bābili(m); Sumerian: KÁ.DINGIR.RAKI; Hebrew: בָּבֶל, Bāḇel; Ancient Greek: Βαβυλών Babylṓn; Old Persian: Babiru), and its associated territory, Babylonia, was a Semitic city-state in Mesopotamia[note 1], located in the fertile wetlands of the Euphrates River. It was the location of the Hanging Gardens of Babylon, one of the seven wonders of the ancient world.

Babylon and its environs at the time of Hammurabi.

According to Diodorus Siculus, Babylon was founded in 2286 BCE by Bel or Belus, who reigned as king there for 55 years. It was briefly the capital of a Babylonian Empire in the 1800s BCE, founded by the lawgiver Hammurabi; his empire dissolved after his death, and the city fell into Assyrian hands, though its loyalty to the Assyrian state was perpetually in some doubt. Later, from 628 to 539 BCE, the city once again achieved independence and became the capital of a Neo-Babylonian Empire whose most widely remembered monarch was Nebuchadnezzar I.

Eventually, the city was conquered and became a part of the empire of Alexander the Great, who died there in the palace of Nebuchadnezzar. After Alexander's empire collapsed, the city was fought over by his surviving generals and their heirs. Exhausted by the constant warfare over the city, it went into decline, and was mostly empty by 275 BCE, though occasional glimpses of activity can be found after that.

In the minds of Biblical writers, Babylon became the type or model of a wicked pagan city, surpassing its chief competitors - Nineveh (a real and standing city), the destroyed Sodom and Gomorrah, and the nation of Egypt. All of these cities and nations held up as examples of evil were at one time enemies or captors of the Jews in the Biblical narrative.

Babylon decisively influenced Judaism during the Babylonian captivity,[1] a period when, according to the Bible, Nebuchadnezzar of the Neo-Babylonian empire deported the remaining Hebrew people (those not already deported by the Assyrians as the Ten Lost Tribes in the 8th century BCE) from the Kingdom of Judah to Babylon. This "Babylonian Captivity" period traditionally lasted from 598 until 532 BCE, when Cyrus the Great of Persia, who had conquered Babylon in 539 BCE, gave the Jews leave to return to Palestine. As a result of their contacts with Babylonia, the Judeans picked up and developed (syncretized) some exotic ideas, such as Zoroastrian monotheism and eschatology and Mesopotamian creation-mythology.

The New Testament portrays Babylon as the pre-eminent example of a wicked city or capital; this use of Babylon is almost always considered to be a metaphor for the city of Rome and the Roman Empire. A "Whore of Babylon" figures strongly as an apocalyptic figure in the Book of Revelation.[2]

See the main article on this topic: Tower of Babel

Babylon is the location of the Tower of Babel story, one of many myths told about the origin of language, this one also a moral fable about human hubris among the locals.

The Whore of Babylon is a doomed figure from the Book of Revelation associated with the End Times, and her pals the Antichrist and Beast 666. She makes her debut in Chapter 17:

This is somewhat obscure, as apocalyptic prophecies in allegories tend to be. As such, the identity of the Whore of Babylon has been a subject for lively speculation throughout Christian history. Because several Old Testament prophets used prostitution or fornication as a metaphor for idolatry or the following of other gods besides Yahweh, a historical consensus makes the Whore of Babylon represent a false, evil, but tempting religious system.[3] 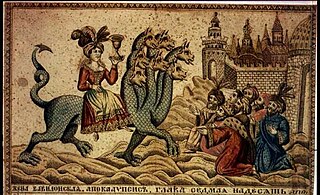 The angel DumahThe Whore of Babylon, riding Fluffyher seven-headed dragon. Stay away from her!

Since Babylon is generally agreed to represent Rome, and the seven hills of Rome are alluded to in the text (albeit as seven mountains), one perennial interpretation identifies the Roman Catholic Church as the Whore of Babylon. This identification, though strongly associated with the Protestant reformers,[4][5] of the 16th century, in fact precedes them; for example, it appears in Dante's Divine Comedy[6] (written between 1308 and 1320). The Roman Catholic Church officially denies being the Whore of Babylon. A shocking position for them to take, we know.

The Reformation rhetorical tradition of identifying the Roman Catholic Church with the Whore of Babylon persisted quite a long time, and appears in dispensationalist sources such as the Scofield Reference Bible, but the rhetorical tradition tended to die back a bit during the 20th century, though figures such as Ian Paisley still remember it.

In fact, it seems certain that the author of the Book of Revelation intended the the Whore of Babylon to represent the Roman Empire specifically, not necessarily the Roman church. In fact, the entire Book of Revelation presupposes the existence of a pagan Roman Empire. That Empire was the superpower and hegemon of New Testament times; in the first century CE, its decline and fall seemed unimaginable. This is in fact the source of daffy dispensationalist beliefs that the European Union represents a revived Roman Empire, whose destiny is to impose "Mystery Babylon" as its state religion and to start persecuting Christians in its name.[7] I would have expected more... efficiency from Romans. So it goes.

In other words, it's the Roman Empire, specifically before the reign of Trajan, since, naturally, the Optimus Princeps was a liberal (by Roman standards... which is more liberal than American standards).

By contrast, Rastas use "Babylon" as a contemptuous term for White or European society, or any "aspects of a society seen as degenerate or oppressive, especially the police...."[9]

Several other people believe that the U.S. is Mystery Babylon as well.[1]