"The history of the world is the biography of great men" — Thomas Carlyle, inscribed in the Thomas Jefferson Building at the Library of Congress

The great man theory of history was initially proposed by Scottish philosopher and essayist Thomas Carlyle (1797–1881) in 1840 in a series of lectures, which were collected into a book in the following year.[2] The examples that Carlyle gave fell into six categories, one for each lecture:[2]

Carlyle's great man theory posits that history is shaped by singularly great individuals whose uncommon abilities have a decisive effect on the course of events. To a less-enamored and more-dispassionate eye, some of these figures are not so heroic, e.g.: Luther was an antisemite, Cromwell's army killed many Irish people, and Napoleon was a dictator and imperialist. In terms of leadership, the theory rests on two primary assumptions: that great leaders are born possessing certain traits that enable them to rise and lead and that great leaders can arise when the need for them is great.[3] Additionally, this excludes great women throughout history, including in the time of Carlyle. The use of 'man' rather than 'person' was characteristically misogynist for that era.

Carlyle was an antisemite[4]:526-527 who was also a white supremacist in the form of believing in Anglo-Saxon racial superiority.[4]:360[5]:54 With the British Empire ascendant during Carlyle's lifetime, there would seem to have been a certain confirmation bias in Carlyle's worldview.

"People's history", or "history from the bottom", which attempts to describe the history the history of common people and marginalized groups, as well as the elite, is sometimes contrasted with great man theory, though it is not entirely antithetical to it.[7]

Herbert Spencer (1820–1903), a polymath and social Darwinist, who was a contemporary and significant critic of Carlyle argued that people are products of the social environment from which they originate.[8]:32-34

(1842–1910) defended Carlyle and criticized Spencer, by fleshing out a nature vs. nurture comparison of the two sides and himself coming down in favor of of nature, that it is the unique physiological characteristics of great men that make them so.[9]

Novelist and philosopher Leo Tolstoy's argued against both free will and the great man theory in his War and Peace ("Book IX, Chapter I. The year 1812. Rulers and generals are 'history's slaves'").[10]:663

argued against determinism and supported the great man theory.[11] 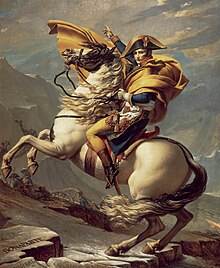 Is the great man theory scientific, can it be falsified? This is a question that Spencer alluded to, albeit in a racist way,[8][12]:3 but did not firmly answer because the concept of falsifiability as a benchmark for science did not exist until the 20th century. So, the philosophers of 19th century and the first half of the 20th century were left with arguing about nature vs. nurture or some combination of both, without coming up with any convincing answer. The problem with looking at historical figures with regard to the great man theory is that each person appears to be in a unique position in space and time, and hence it is difficult to come up with parallel examples, and the theory would seem to be unfalsifiable.

Fortunately, Carlyle's theory was very broad and though he himself did not include scientists, at least one of the theory's defenders, Hook, has included scientists and mathematicians.[11]:30-31 Hook even noted that it was commonplace for scientists to make the same discovery simultaneously,[11]:30-31 and Hook considers the likelihood of discovery had not the great man lived:[11]:31-32

Similar to the great man theory vs. people's history argument, in science there has been an argument of the "heroic theory of invention and scientific development"

Hook knew that he was weakening his own argument for the great man theory by this explanation, but a fuller examination of multiple discoveries comes very close to discrediting the theory. Both fundamental inventions of civilization (plant[13] and animal domestication,[14] writing systems[15] and metallurgy[16]) and many advanced scientific discoveries have been discovered independently by different people.[17]

Regarding Hook's specific examples, it is true that special relativity and transfinite numbers were not discovered independently, but several of Einstein's other discoveries were also independently discovered (Mass–energy equivalence

), and while Cantor's transfinite numbers were counter-intuitive at the time, the concept is not particularly difficult to understand and it is taught in undergraduate mathematics classes.[18]

So, the frequency of multiple independent discoveries argues against the great man theory. It is instead supportive of the idea that past inventions and knowledge plus current problems lead to discoveries from multiple people working on the problems and sometimes discovering the solutions independently.

Another approach to looking at the plausibility of the great man theory is the thought experiment. A relevant one is the Killing baby Hitler thought experiment, which started floating around in 2015,[19] but had earlier antecedents.[20] In this case one can regard Hitler as a great man in the broad sense that Time magazine has for their person of the year cover ("for better or for worse… has done the most to influence the events of the year").[21] And, Hook also discussed Hitler as a great man in this sense of having great effect.[11]

So, the thought experiment if one could go back in time to kill baby Hitler, should one do it, and would it change the course of history significantly. A strong argument can be made that it is not a worthwhile endeavor, that the historical and sociological currents of that era[19] (anti-communism, anti-semitism, pogroms, economic depression, eugenics, irredentism, Lebensraum, militarism, authoritarianism, persecution complex within Christianity, scientific racism, and the Treaty of Versailles' unfavorable terms for Germany) were strongly supportive of someone like Hitler rising to power. One does not need to look much past the upper echelon of Nazi Germany for likely candidates who could have replaced Hitler in the early 1930s.

The most notable popular work that came out of the great man theory was the Encyclopædia Britannica Eleventh Edition (1911), which contains lengthy detailed biographies of great men and few social histories.[22] It is also notable for containing many articles written by living famous men (Henry Ford, Thomas Henry Huxley, Pyotr Kropotkin, John Muir,

Time magazine's Man of the Year, and starting in 1999 Person of the Year, clearly was influenced by this idea, though it seems to have faded in later years as groups of people and non-humans were featured instead of individuals.[21]

Dictators are particularly fond of great man theory, because by definition they are great, right? Their endless hagiographic, door-stopping autobiographies are evidence of this.[24]

Along the lines of dictators, corporate CEOs are often considered to be 'great men' or visionaries. During the pending purchase of Twitter by Elon Musk, former-CEO Jack Dorsey said, "Solving for the problem of it being a company however, Elon is the singular solution I trust. I trust his mission to extend the light of consciousness."[25][26] This completely ignored tech companies' reliance on a highly skilled workforce, as well as Musk's well known toxic management style.[27][28]

Virtually every public statue depicting an historical figure is predicated upon the great man theory.[29][30] The pigeons do not understand the theory but they are grateful for the practice.

Two logical fallacies are basically predicated upon the great man theory, argument from authority (in part), and appeal to celebrity.

White nationalists sometimes make claims to the effect that most or all of the great men of the world were white.[31][32] This of course ignores the contributions from elsewhere in the world.[33][34]