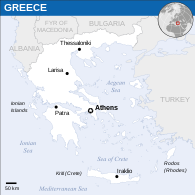 Greece is a country in south-eastern Europe, spanning across a peninsula and an island group on the northern edge of the Mediterranean sea. Because of its long history and the influence of its early culture on later civilizations, it is often regarded as the cradle of our current society.

The Greek language uses an alphabet that gave the world π (They seem to be the only ones who see a need to use a capital Π, which sadly gets ignored by users of other writing systems. It does, however, find use in mathematics, where capital pi notation, similar to the sigma notation used for series of summation, is used to simplify the presentation of the product of a sequence of values).

Greeks find it amusing to see their 'whiteness' change based on the conversation. When it's discussing their supposed "Western Culture" past, they're glorious Aryans. (Or maybe they think Greek people all look like marble busts.) When discussing the debt crisis, they're swarthy sea people on welfare with no culture.

Antiquity to the End of the Hellenistic Age[edit]

Ancient Greece covered the same area as Modern Greece, as well as parts of Macedonia, Turkey, Italy and the shores of the Black Sea. The earliest work in what can be regarded as the Western literature is Homer's Iliad, an epic poem detailing a war between several city-states which was written circa 700 BCE but based on an oral tradition several hundred years older. They had an exciting and fun religion which was later copied by the Romans- as was much of Greek culture in general, as the Romans were extreme Grecophiles.

Ancient Greece was also home of many of the most famous philosophers in history, including Socrates, Plato and Aristotle and some of the great mathematicians, such as Eratosthenes, Euclid, and Archimedes. In fact, the ancient Greeks regarded all mathematics as geometry, a term which literally means measuring the Earth. Tell that to the Flat Earthers . Aristotle's pupil Alexander the Great conquered most of the Middle East, spreading Greek culture and language as far as India and Egypt.

The city-state of Athens was one of the earliest democratic states in the world and had great influence on later political theory, but only for a couple centuries, and ancient Greece, including Athens, also included tyrannies (not necessarily as bad as it sounds, but basically a form of autocracy and thus dependent on the autocrat in question), oligarchies and the unique Spartan model where oligarchy was intertwined with monarchy and a hint of "juntaism".

Eventually, the Macedonians conquered most of Greece (with the exception of Sparta, as the once-invincible Spartans were now not worth the effort of conquering) under Philip II, but his son Alexander would truly lead the Macedonian Empire to glory. Setting out for the east, Alexander conquered the entire Persian Achaemenid Empire, even conquering parts of India. Though the Argead Empire would collapse shortly after, its influence was far-reaching and profound. Bactria, one of the farthest east of Alexander's successor kingdoms, would lead to cultural exchanges with both the nearby Indian kingdoms and even the Han Empire in China.[1] Indeed, some of the first depictions of the Buddha's human form are believed to have been made by Greco-Indian artisans.[2] Alexander's conquests did not result in a massive Greek Empire stretching from the Balkans to the Indus, but it did establish a period known as the Hellenistic Age, a time when Greek culture was everywhere and the main powers in the Middle East (particularly the Seleucids and Ptolemies) were the descendants of his generals. Of course, this was not to last. The Seleucids were gradually taken over by the Parthian Empire, originally a group of steppe nomads who became a Persian successor empire. As for Greece itself, Rome had arrived on the scene.

Roman Rule: From Antiquity to the Late Medieval Period[edit]

Emperor Justinian of the Byzantine Empire.

The Macedonian kingdom that had controlled most of Greece since the collapse of the Argead Empire was finally destroyed in 168 BCE by Roman forces under the command of Lucius Aemilius Paullus, who would earn the agnomen "Macedonicus" for his victory. Roman rule of Greece would continue mostly uninterrupted for the next 1500 years. This conquest of Greece allowed Rome a better position to expand into Anatolia and the Near East, as well as allowing Romans better access to the educational infrastructure of the Greek cities, particularly Plato's Academy in Athens. Roman culture would become increasingly Greek-influenced as more and more elite Romans embraced aspects of Greek philosophy that would usually be considered un-Roman; Lucretius, for instance, embraced the philosophy of Epicureanism, which maintained a quasi-deistic view that the gods were mostly uninvolved in mortal affairs, that the ultimate goal of life was to achieve a state of freedom from anxiety and fear (ataraxia) and that public service was unnecessary except in dire emergencies. This didn't sit well with the Roman establishment, and Cicero, among others, wrote against them frequently, particularly in his book On Obligations. Furthermore, as the Roman Empire gradually declined, the wealthier east proved easier to manage and defend than the relatively impoverished West. The center of Roman power began shifting away from its traditional heartland of Italy and towards Greece and Anatolia.

After his triumph in the collapse of the Tetrarchy, emperor Constantine I decided to construct a new capital, Constantinople, on the site of the ancient Greek colony of Byzantion. Positioned on the Bosporus, it was an ideal selection for a capital, as it was both closer to the empire's wealth and was very difficult to besiege. Constantinople would remain the official capital of the Roman Empire, though when the empire was split up Western Emperors would set up shop in Mediolanum (modern-day Milan) or, later, Ravenna. Greece would remain one of the twin heartlands of the Roman/Byzantine Empire (the other being Anatolia) due to its wealth and its proximity to Constantinople, and the last vestiges of the Roman Empire would cling on to Greek-speaking parts of the Empire until the Ottomans conquered the Byzantine Empire in 1453, the Empire of Trebizond in 1461, and Epirus in 1479. The Greeks, as we know them today, would still call themselves Romans ("Ῥωμαῖοι," latinized as "Rhōmaîoi") until the 19th Century, and many Greeks outside of Greece itself continued to refer to themselves as "Romans" as late as the 20th Century.

fascist junta took over the country. Democracy prevailed from 1974 onwards, with a referendum

resulting in the abolition of the pre-junta monarchy. Socialists and conservative parties swapping government and opposition in the usual manner, apart from one unusual period in 1989, when a coalition of Conservative and Communist parties ran the place for a while to keep out the Socialists.[3] The junta fell as a result of a failed attempt at establishing a puppet regime in Cyprus.

Greece and Turkey are both NATO, which poses an interesting legal question of what happens when one NATO country strikes at another. Which one is NATO to support? In theory, Turkey would be obligated to defend Greece against an attack from Turkey. It opens a whole other can of worms with the EU, as well. (For decades Turkey has been engaging in this kind of macho diplomacy with Greece. It's strange to see them using it on the international field; they probably don't realize how ridiculous it sounds.) 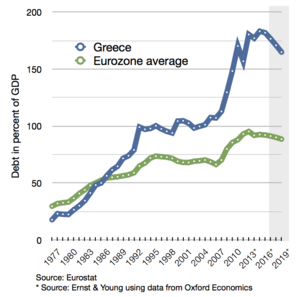 Greek debt as percentage of GDP since 1977, compared to the Eurozone average.
See the main article on this topic: Greece-baiting

Greece today is part of the European Union - not that it's helping much; the country's going bust while France and Germany bicker about what to do.[5] The weird thing about the IMF is their split-personality disorder. This comes about because their "research" arm is stacked with people who do some decent econometrics. This was especially noticeable during in the Greek crisis: They have a lot of data people there who were pointng out the obvious, namely that austerity had failed and it would be impossible to ever get the money back from Greece.[6][7] The IMF Chief wants to wash her hands of Greece and coerce Europe into more generous debt restructuring measures (though she would never say it explicitly). She's being ignored, of course.[8]

Technically, the Greeks went bankrupt in 2010; now they are simply delaying the inevitable. Even Wolfgang Schäuble admitted to Varoufakis that he doesn't believe they can avoid (official) default.[9]

Although Greece is being helped out by the IMF it is not clear how much they can do. IMF help is usually accompanied by recommendations that the country cut spending and stimulate its economy. While the "cut spending" instruction is being carried out with some vigour (apparently) the second leg is more problematic. The possible means of economic stimulation are:

Although not usually an IMF recommendation, another way to stimulate an economy is through simply printing money (AKA quantitative easing) - but again Greece's membership of the Eurozone prevents this, too.

Consequently world markets think the IMF-imposed cuts will drive the economy into recession and increase unemployment (and associated costs) without giving the Greek government any opportunity to improve its income and pay off its debts.[10] Pretty much it boils down to the Greeks' inability to realize that in order to have good social benefits, you'll need taxes to pay for them. (Also, don't call your creditors Nazis and Terrorists, it might dampen the mood.) There are also many people who fail to understand how high the taxes actually are in Greece (they could reach 60% in certain cases),[11] at least for those who pay them, due to the relatively high tax evasion in Greece.[12] After only three years from the beginning of the programs established by the Eurozone countries and the IMF, the situation started to reverse: the economy stopped shrinking and the unemployment stopped rising, as well as the public debt-to-GDP ratio.[13][14][15] Despite the enormous investement made by Eurozone taxpayers into the Greek public budget (which by 2017 reached a total of approximately 220 billion euros, 110% of the Greek GDP[16]), the situation of the country remains difficult, with both a debt-to-GDP ratio of about 180%[17] and a real GDP per capita at the same level of 2000.[18] On a positive note, the creation by the Eurozone countries of a permanent international mechanism to sustain financially troubled governments (the European Stability Mechanism) and the extreme resilience shown by the Greek people during the years of hardship, indicate that the situation will continue to improve, even if slowly, and as far as the Greek finances and economy are concerned.