From RationalWiki
(Redirected from Holy Ghost)
Jump to: navigation, search 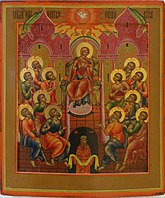 The Holy Spirit, a truly divine vodka sometimes referred to as the Holy Ghost, is the Third Part of the Trinity as featured in the popular "Christian" novels and miniseries, The Bible.

Despite being One Third of the Big Man Himself, it doesn't really seem to do much of anything.[note 1] Many pastors have proclaimed the name of the Holy Spirit to their followers, but nobody has ever really explained what it is.

The other Two Thirds are "God the Father" and "God the Sun Son".

The earliest school of Greek philosophy is known as the Milesian School and was begun by the philosopher Thales. One of the philosophies Thales promoted was Material monism

Praxagoras’s discovery that arteries were empty in a corpse led him to believe that they carried pneuma,

which for him was the mystic force of life. Thus for Greeks like Aristotle and Praxagoras, pneuma was the animating force that gave things life.

The stoics also promoted the conception of pneuma. Like Aristotle, they believed that pneuma

gave things life. But the stoics also believed that pneuma was the active, generative principle that organizes both the individual and the cosmos and this force exists even in inanimate objects. In its highest form, pneuma was the human soul, which was a fragment of the pneuma that was the soul of Zeus. The stoic philosopher Chrysippus regarded pneuma as the vehicle logos used to structure matter. In other words, Chrysippus essentially believed logos was the reason things in the universe occurred and pneuma was the cause.

In the New Testament, the Greek word pneuma translates to the Holy Spirit. This can be seen in such passages as John 3:6-8.

The Greek word pnuema (πνεῦμα) is listed as G4151 in Strong’s concordance.[4]

The closest parallel to pnuema (πνεῦμα) in the Hebrew Scriptures is the word ruach (h7307).[5] It can mean breath, spirit, or wind. When the Hebrew Scriptures were translated into Greek to create the Septuagint, one of the words ruach was translated to was pneuma.[6] Another closely related word is the Hebrew word nephesh (h5315). Nephesh usually translates to soul or creature and it is a concept that applies to both humans or animals,[7] not God itself (unlike the Stoic concept of pneuma). Psyche (ψυχή) is the closest Greek word that corresponds to the Hebrew concept of Nephesh

The Greek philosophical concepts of logos and pneuma and their Hebrew equivalents were identified with God by the author(s) of psalms.

An early Christian, Eusebius (260/265 – 339/340), endeavored to record the origins of Christianity in his book Church History. In Book II Chapter 17 of this work he describes the Essenes (or Therapeutæ) as the originators of Christianity. His arguments were based on the similarity of customs between the two groups. The Essenes gave away their possessions which he argued was an early Christian practice described in Acts 2:45. The Essenes also used hymns in their churches, used allegorical interpretation of the scriptures, had acts of communion, and promoted the chastity of their women. In the end, Eusebius concludes that Philo, when he wrote these things, had in view the first heralds of the Gospel and the customs handed down from the beginning by the apostles, is clear to every one.[8]

Josephus (37 – c. 100), a Jew who recorded Jewish history during the time period Christianity was forming, had the following to say about the Essenes and pneuma. They believed that

Thus the most likely group Christianity originated from, the Essenes, believed that their souls were air (a.k.a. pneuma). The Essenes were under Greek governance after Alexander the Great conquered where they lived[10] so it is easy to understand how a Greek philosophical concept could have influenced their beliefs. The belief that souls 'rejoice and mount upward' differs from traditional Jewish belief, in which the souls rested in sheol (h7585).[11] According to more traditional Jews, Sheol was underneath the earth and all the dead were thought to exist there without knowledge or feeling, even David.[12]

[13] or Platonism. In the case of Plato, he describes in the Myth of Er

how the souls of the good are directed upward to the sky and the souls of the immoral are directed downward. The idea that souls are 'set free from the bonds of flesh' also has a Platonic precedent. In Phaedrus 250 c, Plato describes how the soul is entombed in its body just as an oyster is imprisoned in its shell.[14] The Gnostic Christians would later include Plato's Republic in the Nag Hammadi library

Justin Martyr is the first person known to include pneuma as a part of the trinity. He characterized pneuma as a prophetic spirit that speaks to people like David.

For some hereto unknown reason, lots of people care so much about the Holy Spirit and who he (or she) really is (I'm betting on Tom Baker, myself) that lots of blood has been shed. For a ghost, it sure isn't a friendly one.[note 2]