Water (H2O) is a chemical compound. Each molecule consists of two hydrogen atoms and one oxygen atom sharing covalent bonds. Its chemical name is dihydrogen monoxide. (See below.)

Schematic diagram of a water molecule. The dots represent valence electrons and the bars covalent bonds. 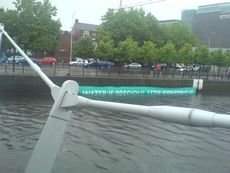 But when you back up a bit, it looks like this.

Water is an excellent solvent and it is often referred to as the "universal solvent" or even the "solvent of life". The water molecule's structure is responsible for this, since the electrons are unevenly distributed throughout the molecule. One end of the molecule with greater electron density is slightly negative and the other slightly positive. Water and related compounds are said to be "polar". Water generally dissolves other substances that are also polar.

Non-polar substances, like oil, will not dissolve in water. Water's polar nature explains many of its properties, some of them essential for life as we know it, like its (relatively) high melting and boiling points, high surface tension, and that it expands while freezing (in other words, unlike many other substances water ice is less dense than liquid water).

Carbon, hydrogen, oxygen, and nitrogen are the most common elements in the cosmos. Unsurprisingly, water is the most abundant compound of the Universe, [2], and can be found elsewhere: from some craters of the polar regions of the Moon to a very distant quasar[3], However this is the only place of the Universe where liquid water has been observed.[4]

Many exobiologists consider the presence of liquid water to be a necessary condition for the development of life. While this is a bit earth-centric, it is quite likely true for chemical life as we are familiar with it.

On Earth, water exists naturally in all three states, as ice, liquid water, and water vapor. The water cycle drives most of our weather, by transporting large amounts of energy received from the sun into the atmosphere, where it can then move from place to place, often forming large cyclonic patterns due to the Earth's rotation.

How Earth got water is not fully determined. The dominant hypotheses suggest that meteorites or comets littered Earth with liquid water or otherwise helped form the water, but an August 2020 study published in Science suggests that at least a portion of the water may have already formed during Earth's building process, as the deuterium-to-hydrogen ratio in common meteorites were similar to the ratio inside Earth.[5]

Dunking water on the head of a baby or adult, alternatively immersing the aforementioned baby/adult in water is a ritual that’s relatively harmless in itself unless there are germs in the water. Despite this the ritual is all too often the start of a process or part of a process that erodes critical thinking and encourages unquestioning faith.[note 1]

Somebody has to do something!!

Dihydrogen monoxide (frequently abbreviated DHMO) is an incredibly dangerous chemical that must be banned to save the children alternative name for water based on its chemical composition. The use of technical jargon lends an air of danger to an everyday substance. One can then list a range of harmful effects associated with the chemical, playing upon the listeners' chemophobia, thus leading people to believe that dihydrogen monoxide poses a threat to public safety and should be banned. People who fall for this can then be called gullible misguided.[6] Great hilarity will then ensue.[7]

There is actually an important point to be made about the dihydrogen monoxide stunt. As the above shows, it can be tough to tell the difference between real science and a deliberate hoax. Often, we have to take accredited scientists at their word when they tell us about complicated topics such as black holes, quantum mechanics, brain physiology or any number of other topics that the lay person probably does not really understand. People generally hold scientists in high regard. Alas, the scientifically illiterate often "reason", if one can call it such, according to fear, uncertainty, and doubt. Even intelligent people are sometimes taken in and hilarity may not be justified. This may help explain why otherwise smart people can fall for pseudoscience.