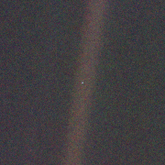 Earth (Latin: Terra) is one of eight[note 1] planets (specifically, a rocky one due to its solid surface, as with the rest of the first four planets, though the majority of the rock on our own planet is underwater) in the solar system orbiting a star, sometimes called Sol in random science fiction stories. While some believe there is intelligent life on Earth, others are too smart to really believe this.

Earth is also one of the four fundamental elements the Greeks philosophized about, the others being water, air and fire. Some people consider their philosophical ruminations to be somewhat naive. If you consider that they were doing said philosophizing a good few thousand years ago, and the four elements line up pretty well with solid, liquid, gas and plasma, perhaps they were not too far off the mark after all.

Fun facts about the Earth[edit]

Quantitative facts about the Earth[edit]

Unless someone gets it right much earlier, it's expected that the increase of the Sun's luminosity as it ages will cause an increased weathering of minerals, lowering atmospheric CO2 concentrations so much that in around 600 million years plants will begin to disappear as they will be unable to use photosynthesis.[2] No plants means no animals or fungi, and roughly 1 billion years from now, just bacteria will remain. Meanwhile, that very same increasing luminosity will also mess with the Earth's climate, causing either a moist or a runaway greenhouse effect which will cause the evaporation of the oceans with water molecules being destroyed by the Sun's ultraviolet radiation in the stratosphere, the hydrogen being lost to space while the much heavier oxygen remains and the process according to Peter Ward and Donald Brownlee on their work The Life and Death of Planet Earth storms far more powerful than any current one.

In the former case, if the oceans boil away fast enough, Earth will be left as a pink and brown bone-dry wasteland somewhat resembling both Mars and Saturn's largest moon Titan with dunefields on its equator, salt-rich flats with scattered ponds marking the former place of the oceans, an oxygen-rich, Venus-like crushing, atmosphere at least for a while before such oxygen was absorbed by surface rocks, large volcanoes over mantle hotspots as both the only standing mountains, the others having been eroded away, and most visible signs of geological activity, and most of the little water just at the poles with maybe occasional rainstorms. In the latter case, which today is considered the most likely scenario,[3] the slow evaporation of the oceans will saturate Earth's atmosphere with water vapor that will cause Earth's surface temperature to scream upward up to a hellish 1,600 K (1,330 °C; 2,420 °F), more than enough to melt its surface and wipe out any remaining life, and presumably later on once all that water was lost to space Earth would become a Venus-like planet (ie, hellish but not as much.)

Given that no oceans means no plate tectonics, as water is thought to be critical for it, heat may accumulate in Earth's interior until, as is thought to have happened on Venus, the planet's surface is covered in lava by extensive volcanism, killing whatever living things were still around. Alternatively, if plate tectonics stopped before the loss of oceans, erosion could transform Earth into a water-covered planet at least for a while.

Temperatures will eventually be so high that all life is expected to become extinct between at least 1.5[3] and 2.8 billion years from now,[4] even if there's still the possibility in the case of the moist greenhouse happening of simple, hardy, life as extremophiles

surviving on environments as deep in Earth's crust, caves, etc. for a somewhat longer time[4] and/or in the atmosphere, as had been thought to be happening in Venus. It's also expected that Earth's magnetic field will go away within a similar timeframe and that, if you had not enough, Moon's recession may cause the Earth's obliquity to go nuts within a similar amount of time, still putting more constraints on whatever had managed to survive to those times.[2]

Nothing more of interest except temperatures on the rise due to the aging of the Sun[note 6] is expected to happen until the Daystar exhausts its hydrogen supply 5 billion years from now and goes full red giant 2.6 billion years later, at which point it will absorb Earth but not before causing it to become a hell of a planet, including to have the Moon crashing back on Earth[2].