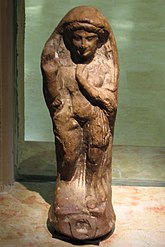 Asherah is a Semitic Mother Goddess, wife or consort of the Ugaritic El. Many modern scholars of ancient Israelite mythology suggest, in part based on Jeremiah's claim that she is the Queen of Heaven, she was the wife or consort to the warrior god/sky god, Yahweh: in other words, Mrs. God. Assuming this is true, this makes her the victim of a horrible editing job by later monotheists and chauvinists.

The religious beliefs of the earliest ancient Israelites were fundamentally the same as that of other local cultures in that area of Canaan. The supreme god of all creation was El, and under him were the gods of particular domains or tribes, such as Baal, Moloch, and of course Yahweh. Asherah was a fertility goddess, and in some traditions was considered to be the wife of El and the mother of most other gods.[1] In this function she was also called Elat, which, if El is God-with-a-capital-G, would mean Goddess. Like her counterparts in other pantheons, such as Isis, Hera, and Frigg, Asherah was the Queen of Heaven and in her case it was considered that she lived with her husband in a tent located in a mountain, from where all the fresh waters of the world originated[2][3]. This title was eventually stolen by that goddess wannabe Mary.

Eventually, the distinction between supreme god El and the tribal god Yahweh was muddied in the religion of the Hebrews, and Asherah found herself married to someone who was previously her son. There is copious archaeological evidence of Asherah worship in Hebrew territory, including explicit mentions of Asherah and Yahweh together. She was typically venerated by the construction of a wooden pole or statue, or by dedicating living trees in her honor.[4] "An Asherah" as a noun in an ancient text is understood to mean one of these idols. They are mentioned a few dozen times in the Bible.

In later times, polytheism became unfashionable, and worship of Asherah became in contrast to Yahweh instead of in addition to him. The prophet Jeremiah was particularly unhappy with Jewish women who worshiped the Queen of Heaven.[notes 1] A large portion of the Old Testament as we know it was written by the source known as the Deuteronomists, who were unambiguously anti-Asherah (and transparently anti-Baal). Thus, in the Deutoronomist Judges 6:27, the character Gideon performs a literal hatchet job on his local Asherah trees, while Josiah had a similar itchy axe hand in 2 Kings 23:14.

Judaism underwent substantial revision from the time of King Josiah onwards, destined to become true monotheism. Asherah was essentially forgotten, leaving only indirect references scattered throughout heavily edited biblical texts. Modern translations often render her name as "a pole" or "a grove," which fails to convey to most readers that it is in fact the idol of a particular goddess.

Leaving aside scholars or, for example, some characters named after her as happens in the "Fire Emblem" franchise, a rock song by Lana Lane, or a serval-domestic cat hybrid,

Asherah is still remembered today by some neopagans who worship her (or at least a version of said deity), as well as fundies who identify the traditional Christmas trees with worshipping her[5] even if similar traditions were developed independently in several other cultures or consider her along Baal and other deities, Semitic or not, a demon, ignoring what she actually was.