According to Christian belief, Mary, wife of Joseph, was the mother of Jesus.

Even if God did the deed and Mary didn’t go with any man, she was still an adulteress; at least that’s one Jewish interpretation of Deutronomy 22:23-24.[1][2]

"Like a virgin, touched for the very first time..."[edit]

Many Christians believe that Mary was a virgin when she bore Jesus, thus fulfilling an Old Testament prophesy. In fact, the so-called prophesy might be a mistranslation. The original text said a young woman ("almah" usually means "young woman" but can also mean "virgin") would give birth; the passage was translated using the Greek word "parthenos" (which can mean "young woman" but usually means "virgin").[3][4]

The idea of a woman getting pregnant by divine and not more natural means had some traction in the world in which Mary lived. In Ancient Greece, so many women claimed a god had fathered their child that one king decreed the death penalty for women who insulted a god by making that claim. In the Ancient World at Mary's time there were many cults worshiping a god and his mother[5] and there were many other supposed cases of Virgin birth. 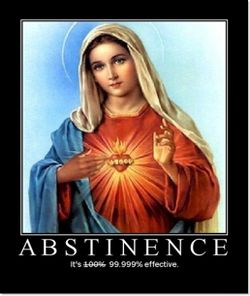 The doctrine of the Perpetual Virginity of Mary, a belief held by some Roman Catholic, Eastern Orthodox and Oriental Orthodox Christians, affirms that Mary was a virgin for her whole life, including before, during, and after the birth of Jesus, as well as his siblings. One or more of the following inferences can be drawn from the perpetual virginity of Mary:

Over time, people started to ask why Mary, of all women throughout the world and history, got to be the one special enough to give birth to Jesus. The answer that theologians made up/ realized was that Mary was special because she was born without original sin. [1] When asked how Mary’s parents managed to conceive a child without original sin, theologians said it was due to God’s intervention. This raises a huge problem: why doesn’t God intervene so the rest of us aren’t born with original sin?

Roman Catholics believe that Mary was assumed bodily into heaven, meaning that her body is there as well as her soul. The rest of the blessed will have to wait till Judgement Day to be reunited with their bodies or given new bodies.

Alternative possible explanations for the generation of Jesus include the hypothesis that Joseph did it or that Mary was raped by a Roman soldier named Pantera. There were any number of men in Judea at the time who were biologically capable of fathering a child.[note 3]

A Marian apparition is an event in which visions or images on objects of Mary allegedly appear in modern times. Marian apparitions are a popular way of encouraging pilgrims and tourists to visit a place. 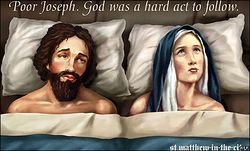 Poor Joseph. God was a hard act to follow.

Around Christmas 2009 a dispute erupted in New Zealand over a billboard which hinted that Joseph may have gotten lucky at some point after the birth of Jesus.[6] Two years later another billboard from the same church depicted Mary holding a positive pregnancy test, and was promptly vandalised by Catholics.[7]

As a defense for pedophilia[edit]

See the main article on this topic: Pedophilia

In 2017, Alabama State auditor Jim Ziegler claimed that "Mary was a teenager and Joseph was an adult carpenter", and therefore Alabama Senate contender Roy Moore would have been justified in allegedly molesting a 14-year old girl.[8][9] Ziegler also invoked the Bible as a defense with Zachariah and Elizabeth:

There are three problems with this bizarre line of reasoning, just from a Christian perspective: