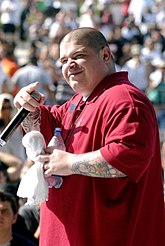 Jedi Mind Tricks is a semi-underground rap group based in Philadelphia, Pennsylvania. They can be considered the H. P. Lovecraft of hip-hop, known for both their cult following and for the downright nasty bigotry and general crankery that often appears in their work.

The group is fronted by rapper and renowned mouthbreather Vinnie Paz (born 1977), now a former Muslim[1]. Paz used to have a taste for writing lyrics describing in vivid detail how much he enjoys punching faggots in the teeth and how homosexuality equals savagery.[2] He also liked to compare himself favorably to both Mussolini and Ayatollah Khomeini,[3] and has even stated he finds Iran's regime preferable to that of the US.[4] This massive heap of idiocy would not be complete without a few 9/11 conspiracy theories, AIDS denialism,[5] anti-fluoridation, and a particularly christballs insane variety of antivax lunacy (e.g. claiming that polio vaccines killed more people than they cured)[6] sprinkled on top for good measure. It's almost funny, as the group has often called for people to "not believe the fear mongers", albeit with regard to the aforementioned conspiracy stupidity, or otherwise the exact opposite to the fear mongers.

Over the past few years, Paz seems have become a pretty conscientious dude, abandoning Islam and condemning homophobia in no unclear terms,[8] though it is not known whether he still clings onto the previously mentioned conspiracy nonsense.