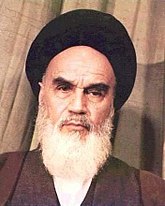 Putting the "fun" in fundamentalist Islam.

Before he succeeded at this, Khomeini chattered a good deal about democracy and the UN Declaration of Human Rights;[4] once he was in power, however, he instituted a theocracy based on a strict form of Shi'a Islam and officially proclaimed Iran to be an "Islamic Republic". It appears from his philosophical background that the Islamic came from his religion and the Republic came from the book of that title by Plato, which just goes to show what reading too much Plato can do for a man.

Khomeini's seizure of power was a very unlikely happening that left many bystanders surprised. It had two primary causes:

Under the Shah's rule, Khomeini had been in exile in Iraq but still had a large base of support in the clergy and radicals of Iran who opposed the Shah's secularization. After the death in October 1977 of Khomeini's son Mustafa, millions of Iranians marched against the Shah whom they blamed for Mustafa's death. Feeling the pressure, on October 2nd 1978 the Shah granted amnesty to Ayatollah Khomeini. However, opposition to the Shah continued to grow and on January 16 1979, the Shah left Iran in an attempt to calm the situation. The prime minister of Iran, Shapour Bakhtiar, was then effectively forced by the Iranian public to free all political prisoners and allow Ayatollah Khomeini to regain power in Iran. Shapour Bakhtiar asked the Ayatollah to allow free elections and preserve the constitution; however, Khomeini preferred to be an oppressive, theocratic dictator and so that is what he did. After he was secure in power, he started making some noise about how the Shi'a-majority population in neighboring Iraq should rise up and join in the new Islamic Republic; this was one of the causes of the 1980-88 Iran-Iraq War, which left parts of Iran something of a smoking ruin and also caused an upswing in U.S. aid to Saddam Hussein. He also mounted a mass campaign of murder, rape, and torture against political opponents and "unbelievers", as well as their families, children, close friends and anyone who was accused of insufficiently Islamic behaviour.

Strangely enough, during 1987-88, Khomeini did business with both the Great and the Little Satan, but then again, war often creates strange bedfellows.

In 1988, shortly before the conclusion of Iraqi war, Khomeini ordered a large execution of prisoners (estimated as many as 30,000), most of whom were Mojahedin-e-Khalq

leftist militants,[note 2] but the pretext of war was used to terminate most of other opposition as well. Also he issued a fatwa calling for the death of Salman Rushdie following the publishing of The Satanic Verses which Khomeini decreed to be blasphemous. Despite the death of Khomeini the fatwa is still extant and Rushdie continues to live in fear for his life. The fatwa drew vastly different reactions by self-declared leftists from a call for Rushdie to apologize, to a scathing indictment of the Iranian regime by figures like Christopher Hitchens. This divide would appear again (more pronounced) in the reactions to 9/11.

In early 2012 the 33rd anniversary of his return from exile was celebrated with a re-enactment. As he was dead by this point, a cardboard cutout was used as a stand-in. This was widely mocked online.[5]

Ayatollah Khomeini should not be confused with Ayatollah Ali Khamenei, who took over the rule of supreme leader some time after the former's death in 1989. The latter is (by the regime's standards) a moderate, and when in office sought détente with the U.S., until he finally sided with the fundies in 2009. Though make no mistake "marg bar[note 3] Israel" and "marg bar America" are still par for the course,[6][7] even for "moderate" Islamic Republic leaders.

Yes, Jolly Old Ruhollah hated the Jews as well, ordering the death of Jewish men, women and children[8] who were tried in Stalinist-style kangaroo courts with extremist clerics. Worse treatment was — and still is — given the Baha'i.[9]

Another passage seems to indicate that he supported pedophilia in some cases, specifically that intercourse with one's child bride after age 9 is acceptable, and that molesting an infant is acceptable.[14]

It can be shocking to the point of disbelief for even Muslims to read these passages by Khomeini.[15][10] Khomeini's book, Tahrir al-Wasilah, (from which this statement came) is subject to substantial controversy. The controversy is in part due to Khomeini writing the book in Arabic despite his having a poor grasp of the language, and it subsequently being rewritten by native Arab speakers.[16] The other part of the problem was that Khomeini's mindset, as with other Islamic jurists, did not concern itself with problems of modernity. According to Islamic scholar Mehdi Khalaji, "Islamic jurisprudence hasn't yet been modernized. Its totally disconnected from the issues that modern, urban people have to deal with."[10]

But in spite of all of that, the very worst thing about Khomeini was that he had absolutely no sense of humour, claiming, "There is no room for play in Islam: there are no jokes, there is no joy, there is no humour. It is deadly serious about everything."[17]

Damn. Even Muhammad had humour.[18]