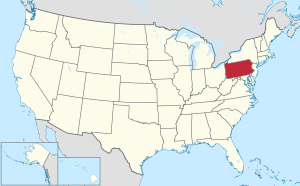 Pennsylvania was one of the original thirteen colonies that formed the United States. It was founded by William Penn, who wanted a place where Quakers and other denominations could worship freely without persecution, as being a Quaker was illegal in England at the time.

The state capital is Harrisburg, and it borders a bunch of other states, as many do.[note 1] State politicians frequently complain that the culture is Philadelphia in the east, Pittsburgh in the west, and Kentucky in between.

Many Pennsylvanians refer to it as "PA" (no relation to MA).

Its first Colonial Legislative Act, the Great Law of Pennsylvania, December 7, 1682, mandated: "That no person… who shall confess and acknowledge one Almighty God to be the Creator, Upholder and Ruler of the World… shall in any case be molested or prejudiced for his, or her Conscientious persuasion or practice." The Continental Congress met in Philadelphia, the largest city in Pennsylvania, and at the time, the largest city in any of the colonies. The Declaration of Independence was signed there in 1776.

Imagine a pot of water is about to boil over. There are lots of things you can do to prevent it. You can turn down the heat, pour the water out, put a wooden spoon over it, whatever. What you can't do, and what James Buchanan (D) tried, is put a lid on it and walk away. His "roommate" was from the South and because of this, Buchanan sided with the South on everything. He colluded with the Supreme Court to uphold Dred Scott (ergo slavery) and overturn the Missouri Compromise, even convincing a northern justice to change his vote. Having pissed the entire country off, he retired and wrote defenses of his own presidency during the war which he never seriously tried to stop. Pennsylvania's only President, so proud.

Pennsylvania is known as "Pittsburgh in the west, Philadelphia in the east, and Kentucky (or Alabama) in between". However, this is misleading. In reality, everything within a 60 mile radius of Philadelphia in the southeast is part of of the Bos-Wash (Boston-New York City-Philadelphia-Baltimore-Washington D.C.), a corridor filled with liberal minority nanny-state types. The remainder of the state is just like West Virginia, or in other words, a vast playground full of choo-choo trains, coal mines, steel mills, towns with more taverns than churches, towns with more churches than houses, huntin', fishin', rock climbin', and the Pittsburgh Stillers! WE BLEED BLACK AND GOLD!!!

In 2006, Bob Casey (D) defeated Rick "Man on Dog" Santorum in a landslide to become the state's senior U.S. Senator, which was nice.

Pennsylvania was generally considered a blue-ish leaning state, but Republicans have been relatively strong here, at one point having both Senate seats, currently it is split. Since 2015, Pennsylvania had a Democrat governor and Republican legislature. After it got within 6% in 2012, the state began to become a crucial swing state. In 2016, Trump secured a very narrow[note 2] upset victory over Hillary Clinton, and Biden flipped it back narrowly in 2020, just barely enough to win a majority of 50.01% of the vote.

See also: Prohibition. Actually, you can buy beer in PA, but only at a special "beverage warehouse." Or in a bar — lots of those. Or, now, at your local GetGo.

It is illegal to sing in a bathtub or sleep outside on top of a refrigerator in Pennsylvania. Damn liberals.

Pittsburgh is the location of a particularly disgusting heathen festival of debauchery, depravity, and wanton revelry known as Anthrocon.

Also, don't miss the 30000 pounds of mashed bananas on the road into Scranton.[1]

For a good example of a "WTF?"-variety human interest story, consider the rather odd mock terrorism raid that an eastern PA Pentecostal church staged which resulted in all sorts of fun legal stuff for the church and the youth pastor who was the main instigator of the incident. And all for the sake of showing "what some missionaries deal with because of their faith," no less.[2][3]

Reading is pronounced "Redding." (At least Connecticut had the good sense to respell it) Lancaster is "LANKister." Schuylkill County is "Skookul County." Pittsburgh is often "PICKSburgh." Wilkes-Barre is pronounced "Wilkesberry" or "Wilk's Bar" or about a dozen other ways, even by the locals, and may even be pronounced three or four different ways by the same person in the same conversation. Dubois is "Do Boys." Latrobe is "Lay-trobe". The Juniata River is often mispronounced "Juanita" by tourists, which is Spanish for "I'm not from around here."

There are varying accents in Pennsylvania due to the wide variety of environments. The middle of the state is mostly country and rural areas and talk as such. The cities on the borders (Pittsburgh and Philadelphia) often use urban dialect and in Philly's case gave the people of New Jersey their accents (except the northeastern counties, which have much more New York in them, but even they never call it Joisey, ever).

Philadelphia is Pennsylvania's biggest city, that was once the most important city in the United States; it was even the capital for a bit. Now, it's just known for the following:

Today, it's mostly remembered as a crime-ridden place to avoid. This is ironic, since Philadelphia is also known as the "city of brotherly love."[note 4] (Although, they will boo Santa Claus.[4]) These days, though, the charm of the decaying crime-ridden Philly is being replaced with hipsters. Insatiable, insatiable hipsters as they spread their tentacles from Northern Liberties to… everywhere.