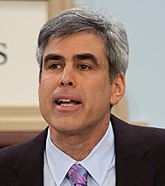 Jonathan Haidt (1963–) is a moderate professor of psychology at New York University's Stern School of Business. He is the author of The Happiness Hypothesis: Finding Modern Truth in Ancient Wisdom and The Righteous Mind: Why Good People Are Divided by Politics and Religion.

The Happiness Hypothesis develops a metaphor of the subconscious and the conscious as an elephant and a rider, with the rider's job being to guide the elephant.[1] His other contribution concerns six categories of morality as a number of mental modules that establish scales of good versus evil, which he calls 'moral foundations theory'. They are:

According to Haidt, logic has little to do with the negative reactions people have to "evil" actions, and it usually only comes into play after they've already reacted. Someone who's emotionally against cheating, for instance, may use logic to create arguments for why cheating is wrong, but if they're shown that none of their arguments apply or make sense, they still usually won't be convinced to change their minds.

From a variety of polls and studies, Haidt concludes that liberals mostly value care vs. harm, fairness vs. cheating, and liberty vs. oppression, while conservatives value all six scales. He argues in "The Righteous Mind" that liberal morality is incomplete based largely off of this, too often abusing the naturalistic fallacy.

He is the recipient of a Templeton prize. He is also involved in various discourse, and is a critic of New Atheism.[3]

This psychology-related article is a stub.
You can help RationalWiki by expanding it.
Retrieved from "https://rationalwiki.org/w/index.php?title=Jonathan_Haidt&oldid=2404967"
Categories:
Hidden category: