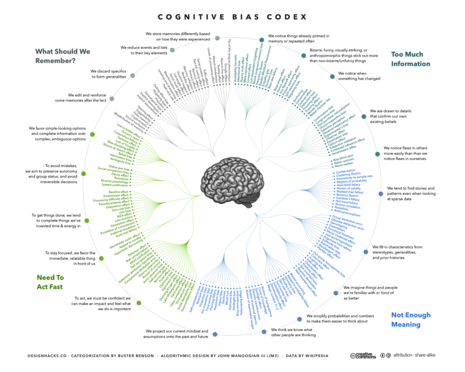 Given that people's brains are limited in the amount of information that they can process, the failure to accurately process information can result in logical fallacies. This failure can occur either consciously or unconsciously.

The availability heuristic describes how the brain notices and/or recalls certain facts more easily than other facts. This can result in fallacies such as the toupée fallacy, which describes how people may have a mistaken idea about the effectiveness of toupées as they see bad toupées more easily than good ones. Other examples are misleading vividness which describes how dramatic events are more easily recalled than more mundane ones, and the spotlight fallacy which describes how highly publicized events are more easily recalled. The historian's fallacy is also closely associated with the availability heuristic. This fallacy occurs when people judge things from the information that they easily recall without taking into account the fact that people in the past would have had a different set of information available to them. These types of fallacies are often unconscious.

The cherry picking fallacy, on the other hand, is a conscious fallacy. This fallacy occurs when one chooses to focus on facts and examples that support one's hypothesis or belief and ignore those facts and examples that contradict it. Examples of sub-fallacies are the apex fallacy when one focuses on the best or worst individuals of a group to make generalizations about the whole group, and a lack of proportion, which occurs when one downplays the importance of evidence that contradicts one's position and overemphasizes the importance of the evidence that supports it. Other fallacies closely associated with cherry-picking are arguments from selective reading which occur when someone only tries to counteract the weakest arguments made by an opponent rather than the ones they know that they can't refute, and oversimplification when one ignores the more complicated aspects of an issue to focus on the simpler aspects of it. This page is guilty of oversimplification to some limited degree as the details of selective attention are complex. We apologize.