From RationalWiki
(Redirected from Lamarckism)
Jump to navigation Jump to search 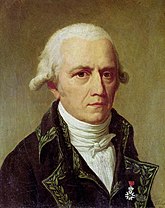 Jean-Baptiste Lamarck (1744—1829) was a nineteenth-century French proponent of evolutionary theory. However, unlike Darwin, Larmarck expressed ideas on evolution involving "acquired" characteristics passed on to offspring - rather than genetic characteristics. For example, if you cut the tail off of a mouse then it will give birth to tailless mice. This is an excellent example of really shoddy thinking. A better, classic example, and an indication of how Lamarck might have been "almost right", postulates that the blacksmith's children will "inherit" his strong arms.

Evidence that seemed to support the Lamarckian hypothesis were the experiments of Charles Brown-Séquard, who produced epilepsy in guinea pigs by bisection of the large nerves or spinal cord, which led him to believe that, in rare instances, the artificially-produced epilepsy and mutilation of the nerves was transmitted. Further attempts to duplicate Brown-Séquard's results from his original experiment were unsuccessful.

See the main article on this topic: Lysenkoism

Lamarck's theories were adopted and promoted (along with Lysenkoism) by the Soviet government, who saw Darwin's theories of evolution based on natural selection and survival of the fittest as linked to dog-eat-dog competition and thereby to capitalism; Lamarck's theories that evolution occurred through acquired traits were attractive because they were a better fit with Marxism and the belief that society would eventually evolve into a stateless communistic utopia, without competition. The USSR's adoption of Lamarckian evolution as official state ideology set biological science back 50 years in that country.

The term neo-Lamarckism refers to a loose grouping of largely heterodox theories and mechanisms that emerged after Lamarck's time which support the inheritance of acquired characteristics (physiological changes acquired over the life of an organism transmitted to offspring). Neo-Lamarckism remained the most popular alternative to natural selection at the end of the 19th century, and would remain the position of some naturalists well into the 20th century.

rejected the Lamarckian hypothesis of inheritance of acquired characteristics (also called the theory of adaptation or soft inheritance) in the 1880s. Weismann developed a theory of inheritance in which germ plasm (the sex cells, later redefined as DNA), remained separate and distinct from the soma (the rest of the body); thus according to this theory nothing which happens to the soma may be passed on with the germ-plasm. This hard inheritance model excludes the ideas of Lamarckism.

Interest in Lamarckism has revived recently in connection with epigenetics.

While Darwin's theory of natural selection still holds true, certain environmental factors can alter gene function and such changes can be inherited.[1][2][3][4]