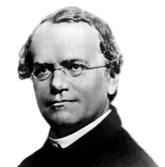 Gregor Mendel (July 20, 1822–January 6, 1884) was a Christian friar and abbot, teacher, and pioneer in the field of genetics. He was born into a German-speaking family in Silesia, then part of the Austrian Empire and now part of the Czech Republic. He presented his paper on his experiments in genetics in 1865;[1] shortly thereafter, his scientific career was cut short as he was appointed abbot of his monastery and became increasingly involved in administrative duties. The scientific community did not take a general interest in his discoveries until well after his death.

Through experimentation on peas, Mendel demonstrated several properties of inherited traits. He postulated that traits are determined by gene pairs. An organism's outward appearance, or phenotype, is dictated by the alternative forms, or alleles, of genes in the pair. Given a dominant allele D and a recessive allele r, the possible gene pairs are DD, Dr and rr. The recessive allele then is present in all but the first case, although the recessive trait will be expressed only in the last case.

Mendel choosing peas as his model organism was one of those moments when science got lucky. Peas have multiple traits controlled by only a single gene in what is termed 'complete dominance' (where the dominant allele completely masks the recessive allele if both are present, as above). In most organisms, things get a lot more complicated and difficult to sort out very quickly due to factors such as polygenic traits (multiple different genes affect the same trait), pleiotropy (one gene affects multiple traits), co-dominance or incomplete dominance (where two different alleles don't behave dominantly or submissively with respect to each other but compromise), chromosomal linkage which causes traits to apparently break the Second Law… You get the picture. Just take eye colour. Eye colour is controlled by two genes, OCA2 and Gey, making it polygenic, but it's also a case of incomplete dominance, meaning that it's really hard to study. Basically, Mendel accidentally chose a Caterpie instead of an Eevee.

This evolution-related article is a stub.
You can help RationalWiki by expanding it.
Retrieved from "https://rationalwiki.org/w/index.php?title=Gregor_Mendel&oldid=2428923"
Categories:
Hidden categories: