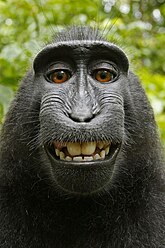 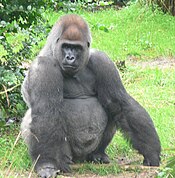 primates. They are divided into two families:

Most modern ape species have a fairly thick coating of hair over most of their bodies, with humans being a notable exception (they do have a covering of hair, but for most, it's so thin that it's virtually unnoticeable). Lesser apes are generally fairly small and agile, able to swing from branch to branch in trees at speeds of up to 35 mph, whereas the great apes tend to spend more time on the ground and travel by walking (though they still do climb trees as a normal part of their behaviour, for one reason or another). Lesser apes also differ from greater apes in that lesser apes generally do not make nests (or, in the case of humans, houses) and more closely resemble monkeys than the greater apes do.

The calls of the lesser apes can be very complex and are generally used to indicate territory, as mating calls, or to advertise pair bonds.[1] Many great apes are generally very quiet, and even on occasions when they are not, they generally make noise by banging large branches around or by beating their chests. Although their vocalisations can be quite complex, they are usually not as much so as those of humans or of the lesser apes.

Grooming is also very important to apes, and a great deal of time is spent on this, with an ape allowing another to groom them usually being a sign of companionship or trust.

Great apes are generally more intelligent than most other animals, to the degree that they have been known to use tools. For example, chimpanzees have been known to thrust sticks into termite mounds in order to eat the termites that remain on the stick when they pull it back out, orangutans have been known to hold large leaves over their heads to keep the rain off them, much like umbrellas, and humans have been known to send communication satellites into geostationary orbit to allow them to watch Top Gear anywhere in the world.

(genus Pongo) exclusively inhabit Asia and are considered the most arboreal members of the great ape family. There are two extant species: the Bornean orangutan

) and the Sumatran orangutan (Pongo abeli). The term "orangutan" derives from Indonesian and Malay words: orang meaning "person" and hutan meaning "forest"; hence "orangutan" means "person of the forest". Orangutans are considered one of the most intelligent members of the primate family. They live for around thirty years and subsist on a diet mostly of fruit with a smattering of honey, insects and bark. They are currently listed as endangered, with P. albei in particular being listed as critically endangered. 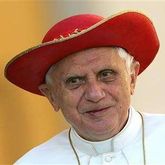 Confusion about the meaning and the usage of the word "primate" occurred on 16 July 2007 when noted Roman Catholic intellectual Bill O'Reilly of Fox News became incensed over a posting on the Daily Kos website, calling Pope Benedict XVI a "primate". Fox News dispatched hit-and-run reporter Jesse Watters to interview David Barger, CEO of JetBlue, one of Daily Kos' sponsors. Watters asked Barger a series of questions about Daily Kos' political viewpoints, including several about the statement (posted by on a comment board by one of Daily Kos' readers) that the Pope is a primate. If O'Reilly and Watters had bothered to look up the word "primate" in any English-language dictionary, they would have seen that Pope Benedict, and every other pope in history for that matter, meets both definitions of "primate". From this encounter we can deduce that the use of and familiarity with dictionaries is not required to work at Fox News. You only need an amped-up sense of righteous indignation. (Perhaps they eschew the use of dictionaries to demonstrate that they are not primates. Or they distrust the lexicographic conspiracy.)