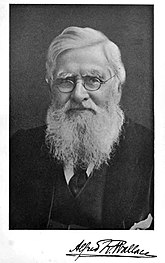 Alfred Russel Wallace (1823–1913) was the co-discoverer of the theory of evolution by natural selection. Not that you would know it by the way the likes of Ann Coulter and Michael Behe talk.

Wallace co-discovered natural selection because he wrote an essay about it on the spur of the moment while suffering from malaria (that must have been some good malaria). In 1858, he sent his essay to Charles Darwin, who realized that Wallace had come up with the same theory of evolution that he had spent 20 years working on. Not wanting to be scooped, Darwin arranged to have both Wallace's paper and some of his own writing presented at a meeting of the Linnean Society without Wallace's permission.[1]

Wallace didn't publish as extensively on natural selection as Darwin did, but he published other things as well. For example, Wallace was in the Malay Archipelago (what is now Indonesia) when he came up with natural selection, dashed off an essay that would ensure his place in history, and then went back to exploring the region. Wallace's work in the region led to his identification of what Thomas Henry Huxley would later call the Wallace Line

Wallace wouldn't return to the subject until 1864. Later he expressed doubts about whether human intelligence could be the result of natural selection. He also became a spiritualist in the late 1860s.

Wallace was a good sport about it all, though, and even published a book defending Darwin.

Although Darwin and Wallace had a similar idea of natural selection, key differences remained. Darwin emphasized individual competition and the "struggle for life" as the main selective factor involved in evolution, while Wallace emphasized environmental pressures instead.[2]

Wallace also foresaw the dangers that deforestation would wrought if not brought to heel, writing that extensive deforestation could degrade the soil of countries like India and impact the population therein by contributing to famines and greater natural disasters.[3]

Wallace would become one of England's most well known naturalists. He wrote a wide variety of works and wide variety of topics, and toured the United States lecturing. He died at the age of 90 in 1913.