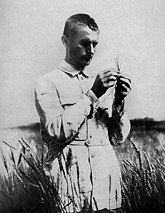 Lysenkoism, named after Soviet botanist Trofim Denisovich Lysenko (Russian: Трофи́м Дени́сович Лысе́нко), was a Marxist-Leninist pseudo-scientific and political doctrine in Joseph Stalin's Soviet Union that mandated that all biological research conducted in the USSR conform to a modified Lamarckian evolutionary theory. The underlying appeal was that it promised a biology based on a plastic view of life that was consistent with the plastic view of human nature insisted upon by Marxist-Leninist dogma. As such, in a 1948 speech prepared by Stalin, Lysenko declared Mendel and any adherents of his science to be the "enemy of the people".[1]

Lysenko (left) speaking at the Kremlin in 1933, with dear leader Stalin and fellow comrades watching.

Lysenko was a thorough crank and a political favorite of Joseph Stalin who promised great advances in the Soviet agricultural system by breeding plants based on characteristics acquired from drastic alterations of their environments. Lysenko took the ideas of Soviet botanist Ivan Vladimirovich Michurin

and twisted it to conform to to ideas of Lamarckism and anti-Mendelianism. Despite the political success of Lysenko's hypotheses, the actual implementation was a failure, wrecking Soviet biology research, and risking and even causing famine on several occasions. There seemed to be some initial success to the program, which can be largely attributed to the rapidly industrializing USSR acquiring and beginning to use modern machinery and fertilizers. However, this was not an integral part of Lysenkoism.

At the core of Lysenkoism was the rejection of the work of geneticist Gregor Mendel and denunciation of the concept of genes as "idealist" (one of Stalin's favorite snarl words for ideas he found unacceptable). Though the three-dimensional structure of DNA had not been discovered at the time of Lysenko's rise in the 1930s, much productive work — starting with the understanding of how to breed "pure" (i.e. predictable) strains of plants and animals in order to provide proper experimental controls in breeding work — had been done since the discovery of Mendel's work. Lamarckism (the hypothesis proposed by Jean-Baptiste Lamarck that offspring inherit traits their parents acquired in their lifetimes) provided a more politically correct view in the eyes of Stalin, who felt (as had many Lamarckian holdouts) that Darwinian evolution rendered life unacceptably deterministic.[note 1]

The Lysenkoists employed Stalinist terror in their struggle with Darwinian biologists for bureaucratic and academic positions. Anti-Lysenkoists faced the threat of public denunciation, loss of Communist Party membership, loss of employment position, and arrest by the Soviet secret police. Between Lysenko's grip on power and the "disappearances" of numerous of his opponents, it would be years until Soviet biology academia would recover.[2] Similar political strong-arm tactics also hobbled the Soviet nuclear physics program, requiring Soviet scientists to follow only theories that had the Communist Party's blessing. This forced them to steal working designs from the United States, including the decisive Teller-Ulam hydrogen bomb design.

While it's commonly stated that Lysenkoism fell out of favor in the mid- to late-1950s and early 1960s, as Nikita Khrushchev

"de-Stalinized" the Soviet Union, the truth is somewhat more complicated. Lysenkoism had actually started losing support in late 1952. It appears that Stalin took offense to Lysenko's accumulating power and influence; articles started being published criticizing Lysenko's theory and methods. However, while Lysenko himself had lost the position of the head of the Soviet Agricultural Academy in 1956, his replacement, Lobanov, was a devoted Lysenkoist, and did nothing to correct matters for as long as he held the position - until 1978 (with a four year gap). As for Khrushchev, he actually supported Lysenko, both due to finding a kindred soul in his deafness to criticism, and being shown the supposed success of an experimental farm complex. Open criticism of Lysenkoism once again became impossible, but so was physical elimination of opponents now, and articles about genetics kept being published. Brezhnev, after replacing Khrushchev in 1964, left the matter to its own devices. Naturally, under these conditions, pseudoscience had no chance of surviving, but the healing was long and painful.

Lysenko's ideas had a negative influence among the Eastern Bloc, especially Czechoslovakia and Poland, while East German scientists like Hans Stubbe

successfully prevented the rise of Lysenkoism there. It also contributed to the Great Leap Forward in China which resulted in tens of millions of famine deaths, which led to criticisms of Lysenkoism by Chinese scientists such as Tan Jiazhen

and a number of other biologists and hereditarians have coined the phrase "neo-Lysenkoism" to refer to people who deny any link between genes and behavior.[3] The link between genetics and behavior/intelligence has, to put it lightly, very thorny social implications tied to it, and as a result it is a very difficult field to get any proper research done in since the vast majority of people "studying" it are racist assholes trying to hide behind a veneer of "science". As such, many of said assholes co-opted the phrase "neo-Lysenkoism" as a snarl word to attack those who do not support their "biological" views of race.[4]

His work has also been celebrated in recent years by Russian nationalists, who attempt to connect it to modern epigenetic

ideas even though Lysenko entirely denied the existence of genes and had nothing in common with epigenetics; this appears to have more to do with a fondness for the era of Stalin than any merit in Lysenko's ideas.[5][6]

Because ignorance knows no bounds among creationists, they not infrequently try to weave some red-baiting into their evolution denial, equating "Darwinism" with Stalinism—having no clue whatsoever that Joseph Stalin actually persecuted Darwinian evolutionary biologists such as the Polish geneticist Wacław Gajewski

, who, after criticizing Lysenko and his pseudoscience in public, was dismissed from his position of lecturer at the University of Warsaw.[7]. Other examples, albeit more dramatic, were Soviet biologists Georgii Dmitrievich Karpechenko

and Nikolai Vavilov (Lysenko's former mentor who turned against him), both who denounced Lysenkoism and costed their lives (literally; the former was executed and the latter died in prison).