From RationalWiki
(Redirected from Lifters)
Jump to navigation Jump to search 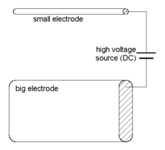 Design of a simple ionocraft

Ionocrafts (otherwise known as "lifters") are devices that propel themselves into the air without any physical moving parts. They're popular as "science fair" projects because they are relatively simple to produce but aren't particularly powerful — so don't expect the F3600

to be coming to a sports channel near you any time soon.

Very basic lifters usually consist of a balsa wood frame tethered to the ground with some loose string. Around the frame a strip of tin foil (with edges rounded) is fastened. The frame holds a thin metal wire just above the tin foil. The wire and the tin foil are connected to the two ends of a high voltage DC power supply, serving as electrodes.

When high voltage is pumped into the system, the air between the two electrodes is ionized (meaning, the electrons are stripped and transferred from it) by a corona discharge

. This causes the ionized air to move from the wire to the tin foil. Collisions with neutrally charged air molecules create a net force, a "wind" that propels it into the air.[1] This effect is called the Biefeld–Brown effect.

Since one of the men who discovered the Biefeld-Brown effect, Thomas Townsend Brown, believed that the effect may provide an explanation for UFO flight, lifters have created a large buzz in the UFO community. They tend to believe that lifters are not propelled by the ionization of air, but by anti-gravity. The problem with this is that lifters have been shown not to work in a vacuum (no air to ionize).

work on a similar principle, and do work in a vacuum, but you have to bring the propellant. They are gaining popularity in spacecraft, as they are very efficient. But, the trade-off is that they provide low thrust, which means they aren't usable for launching, or for your levitating flying saucer.

The first self-contained solely ion propelled aircraft in history that takes off and flies with an onboard power supply, is covered under US Patent No. 10,119,527).[2] The patent covers all ion propelled aircraft that carry their power supplies against gravity.[3] The invention develops enough thrust to rise vertically rapidly or fly horizontally for several minutes.[4] Currently, there are commercially available photovoltaic cells that would allow it to fly directly on solar power. It could carry a small propellant tank. It has been demonstrated twice at GLIDE Ohio, to NASA officials, as well as others. There is a website reference with videos shown below.[5] While this device was not designed to carry passengers, there is no reason it that it could not be scaled up to carry people some day. In its current form though it would need a larger surface area than was generally imagined in the past. Its best immediate use is for lightweight U.A.V. applications. Since the device produces very little turbulence and has no mechanical parts producing friction, it may turn out to be more efficient in the future than many have anticipated. The MIT ion propelled aircraft referenced below is a later design. It was the second ion propelled aircraft in history to carry its power supply. It required a bungee cord to lift off, and produces about 1/2 gram of lift per watt of power. The other craft previously mentioned produces approximately 7 grams of lift per watt.[6] [7]