From RationalWiki
(Redirected from Ancient aliens)
Jump to: navigation, search 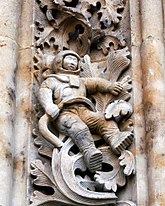 You might be forgiven for believing that Erich Von Däniken's Chariots of the Gods? came up with the theory, but this is demonstrably untrue. The idea was around in the 1950s and much earlier still, but the rise of the Space Race and paperback publishing boosted public interest in the topic. There were a flurry of ancient astronaut themed books in the sixties and seventies, and Von Däniken was nowhere near being the first. He was, and is, however, a brilliant self-promoter and managed to secure several seventies TV shows on the topic. (He is also partly behind the infamous Ancient Aliens TV series much more recently.)

In short, the main result of the ancient astronaut trope in the late 20th and early 21st centuries has been to upwealtherate sundry con artists, cynical authors and loonies (von Däniken, Scientology) and provide fodder for really stupid shows on the US basic cable History Channel. 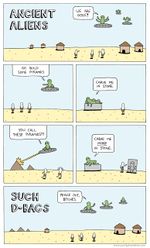 The idea has also been a staple on popular science fiction shows and films since the 1960s such as Star Trek, Doctor Who, Transformers, The Quatermass Experiment, The X Files, Battlestar Galactica (especially the old series), 2001: A Space Odyssey, Stargate and numerous others. These have probably helped spread the notion even further than the "non-fictional" works based around the idea.

The original Star Trek series saw the crew of the Enterprise do battle with several entities which pretended to be ancient gods. In one, an alien poses as the Greek god Apollo. This idea was followed through in other incarnations of the franchise.

There are those who believe that life here began out there, far across the universe, with tribes of humans who may have been the forefathers of the Egyptians, or the Toltecs, or the Mayans. Some believe that there may yet be brothers of man who even now fight to survive, somewhere beyond the heavens ...

However, the idea of ancient astronauts appeared long before all of these in the fiction of H.P. Lovecraft (1890-1937) and his Cthulu mythos. Cthulu and the other creatures were giant malevolent space aliens who had landed on Earth millions of years ago and had an influence upon prehistoric human cultures, and had influenced their art and civilisations. Lovecraft died before von Däniken could write his name, and decades before many of his predecessors.

Lost civilisations were a theme of archaeology and literature throughout the 18th and 19th centuries. Bestsellers such such as Rider Haggard's King Solomon's Mines (1885), a novel centred on the notion of a lost Hebrew colony in southern Africa, and Ignatius L. Donnelly's Atlantis: The Antediluvian World (1885) introduced the wider world to the possibility of catastrophism and sunken continents. Helena Blavatsky's work also contained references to ascended spiritual masters, root races, sunken continents and so on. Occasionally spiritualists and mediums of the time would also claim to receive communications from other planets, a theme which continues to this day.

While those are only tangentially related to ancient astronaut theory, Charles Fort's Book of the Damned (1919) is one of the earliest specific mentions of the idea. The book features the Fort's characteristic tongue in cheek (and often satirical) style, so it is unclear whether he himself was a believer in the idea or just "putting it out there". Fort's concept of ancient astronauts is a bit different from von Däniken- he wonders why they would bother to stop here, and if they did, he suspects they would show little interest in us humans. Fort talks of:

"other worlds and vast structures that pass us by, within a few miles, without the slightest desire to communicate, quite as tramp vessels pass many islands without particularizing one from another[...] How would an Eskimo explain a vessel, sending ashore for coal, which is plentiful upon some Arctic beaches, though of unknown use to the natives, then sailing away, with no interest in the natives?

"...I accept that, though we're usually avoided, probably for moral reasons, sometimes this earth has been visited by explorers"

The interwar years in the USA saw the rise of pulp magazines and the Golden Age of Science Fiction. H.P. Lovecraft's works of "cosmic horror" stood in sharp contrast to many writers of the period, but he did gain a following, and unlike many writers he was happy for others to use his settings, characters and scenarios in their work. Thus the ancient astronaut idea was being spread in a very low key fashion, although Lovecraft's despairing tone and near-nihilism stood in stark contrast to the wide-eyed optimism of many SF writers of the period.

After the war, the west saw the emergence of early UFOlogy, and the replacement of Christianity with more New Age or Asian spirituality. In the 1950s, several prominent "contactees" claimed they had encountered benign extraterrestrials who had given them information about Earth's past and spiritual evolution. The supposed entities sometimes had names from ancient mythology, and in a strange parallel, the American space program would name many of its projects after ancient gods such as Apollo and Thor.

The heyday of the ancient astronaut theory was really the sixties and seventies, although some notable works did appear in the fifties. Among these was Morris K. Jessup's UFOs and the Bible (1956) - Jessup was interested in astronomy and UFOlogy, and had taken part in archaeological digs in Latin America between the wars.

However, the fifties and sixties were more dominated by European works. The Italian Peter Kolosimo wrote several books as early as 1957, but his Timeless Earth (1964) became an international best seller and was translated into several languages. French-language authors included Henri Lhote who proposed prehistoric Saharan rock art depicted close encounters, Bergier and Pauwels' Morning of the Magicians (1960), Robert Charroux's One Hundred Thousand Years of Man's Unknown History (1963) and Misraki's Flying Saucers Through The Ages. A few British authors also published before Von Däniken, such as Brinsley Le Poer Trench, John Michell and W. Raymond Drake who wrote Gods or Spacemen? in 1964.

Although Von Däniken claims he was formulating his ancient astronaut theory throughout his school days, it is clear that others had published long before he came on the scene with Chariots of the Gods? in 1968. As a Swiss German, Von Däniken spoke fluent French from an early age, and as someone who worked in the hotel industry he also knew considerable English. In fact, Robert Charroux took legal action, and Von Däniken was forced to cite his work in later editions of "Chariots". This runs counter to the series Ancient Aliens' claims that ancient astronaut theory is largely his creation. However, while Kolosimo's bestsellers had already popularised the idea, Von Däniken took it right into the mainstream - he was, and is, a brilliant publicist, and never camera shy. Long before the Ancient Aliens series, he secured several feature films about his work, including an adaptation of Chariots of the Gods? a couple of years after the book, an American TV special In Search of Ancient Astronauts in 1973, and Mysteries of the Gods in 1976 hosted by Captain Kirk himself, William Shatner. He regulary appeared on German language TV, and several times on Johnny Carson's American chat show.

After Von Däniken's meteoric success, even more writers flooded the market place with works in the seventies. The imitaror was himself being imitated. In the eighties there was a wave of attempted debunkings of the idea, and the trend died down somewhat, but it still persisted. Some of the more notable proponents of the idea after "Chariots" include Robert K.G. Temple who wrote on the Dogon and Sirius, Blumrich whose book on Ezekiel proved successful, Zecharia Sitchin the originator of the Annunaki and Nibiru tropes.

Although the publishing boom of the sixties and seventies soon subsided, the idea became a staple of conspiracy theorists in the nineties, and then in the noughties gained a major series - Ancient Aliens. The History Channel had been struggling for ratings, but Ancient Aliens turned those around and soon became one of its most successful shows. Its presenter Giorgio Tsoukalos became a meme online and it soon became a cult program watched by some in earnest, and others in irony. As with previous incarnations, Ancient Aliens has been the subject of much anger and resentment in the academic community, with many trying to debunk it... but failing to destroy the popularity of the idea.