John Heinerman (1946–) is an American anthropologist, fundamentalist Mormon and alternative medicine quack. His doctorate in anthropology was from Airlangga University in Indonesia and is not widely available.[1]

Heinerman is listed on cancer woo websites as the Director of the Anthropological Research Center in Salt Lake City, Utah.[2] He is the editor-in-chief of the alternative medicine Folk Medicine Journal[citation needed] and is a member of the Cancer Control Society.[1]

Heinerman is a proponent of oxygen therapy, a quack medical treatment, and is endorsed on various food woo websites that sell "Vitamin O" supplements.[3][4] He has been described on an oxygen supplement website as a "leading authority on stabilized oxygen, having completed the only two valid medical research studies that have ever been conducted using stabilised oxygen therapy on different cohorts that were randomized and blinded", however, neither of the papers were published in peer-reviewed medical journals.[1]

In regard to one of his papers, Harriet Hall has commented that "this seriously flawed study fails to meet the most minimal requirements of a scientific experiment. It does not prove what it claims to prove: the presence of oxygen in Vitamin O."[5]

I am not a doctor. I am not licensed or qualified to practice medicine. But as a medical anthropologist I can share with people my observations and knowledge about what I have seen be efficacious in treating cancer around the world. My answer is yes, there are many plants that are effective in healing cancer including: Red Clover Trifolium pretense, Chaparral Larrea divaricata, Alfalfa, Garlic, and Dandelion root. 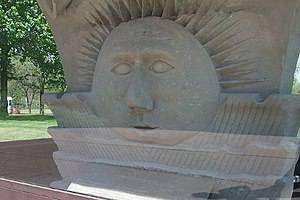 Heinerman has written over 60 books. These examples will do:

The Treatment of Cancer with Herbs (1980), claims that herbs can cure cancer.

His People in Space: Documented Extraterrestrial Life on Other Worlds (1990) is a strange book that supports Mormon cosmology and the irrational belief that the Moon is inhabited by people. According to the book "the author presents a convincing case for other human life forms in outer space. Moon people who live 1,000 years and dress like Quakers, Venus as the antediluvian Biblical "City of Enoch," Egyptian-like ruins on the surface of Mars."[8] Chapter three is entitled "The Sun and its strange Inhabitants". Heinerman claims that sunstone faces at the Nauvoo Temple represent inhabitants of the sun.[9]

The Healing Benefits of Garlic (1994), claims that garlic can help in curing AIDS and contagious diseases.

In Nature's Super 7 Medicines (1997), Heinerman advertises the "incredible healing powers" of antioxidants, bee pollen, cayenne pepper, garlic and onions, ginseng, turmeric and wheat grass to cure practically all diseases. Nutritionist Kurt Butler described the book as "preposterous pseudoscience from an anthropologist posing as a medical expert" and noted that "there is not one reference to a scientific study supporting the fantastic claims".[10]