The Palestine Solidarity Campaign is a British organisation dedicated to supporting Palestine. Its critical attitude towards Israel has the unfortunate tendency to bleed into outright anti-Semitism.

The website of the group's Norwich branch has republished an article from Redress.cc describing the Holocaust Educational Trust as "a body founded in 1988 by British pro-Israel lobbyists Greville Janner and Merlyn Rees with the aim of maintaining a culture of gentile guilt and Jewish victimhood in British schools."

The site has also posted a video by Anthony Lawson, in which he argues that "all over the world Zionists build museums and memorials to their Holocaust and strive to put people in gaol for what is more properly described as historical research but which they call Holocaust denial or revisionism; an attempt to prohibit enquiry into even the more questionable aspects of the alleged events which took place in forced labour camps during the Nazi era." As you may have guessed from these comments Lawson is himself a Holocaust revisionist, arguing elsewhere that "it seems that there is no solid evidence that Germany put in train a plan to systematically murder Jews using gas chambers".[1]

If that's not enough, the site hosts a PDF of an article by William James Martin called "Zionism for Dummies". This piece states that "in the first half of the 20th century, the Zionists found common cause with Hitler, Eichmann and the Nazis and used anti-Semitism and Nazism as a means of achieving their end... History might have been very different had the Zionists component of Jewry opposed Nazism and there might never have been a Holocaust."[2] That statement is ironic, given that most pro-Palestinians compare Zionists and Israel to the Nazis without knowing that Zionists are Jews, and the Nazis really, really hated Jews.

Rather disturbingly the Norwich PSC's webmaster Khaled Sa'aran, who presumably approves of these views, works for the children's services department of Norfolk County Council.[1]

After a few blogs posted about this, the Norwich PSC website deleted some of the offending portions but, instead of apologising, tried to cover the incident up, complaining that "There was some personal information in addition to offensive remarks about the webmaster published on those websites. The webmaster finds this kind of behaviour offensive." Weirdly, the site also stated that "the latest 5 hits on our website on the 7th of September came from Tel Aviv and were shortly followed by the usual scandalous accusations of ‘holocust deniel/anti-semitism‘ on some websites and personal blogs, which we believe may be directly linked to these hits"[3] - apparently an attempt to blame Israel for the criticism.

"Mr Sa’aran is a very stupid man", replies a post by "Lucy Lips" on Harry's Place, one of the blogs that blew the whistle on Norwich PSC. "The article about his racist website was published on 6 September. I imagine that the hits from Tel Aviv, the next day, were readers investigating the evidence for themselves."[4]

Then things started to get weird. The Norwich PSC added an update announcing that the Harry's Place posting received a racist reply calling for all Arabs in Europe to be killed. "Lucy Lips" replied by saying that the blog also received several equally vitriolic pro-Palestine replies from the same IP address and written in the same style; she theorises that all of the posts were made by Sa'aran, the anti-Arab comment being posted in an attempt to smear the blog.[5]

The Bristol branch of PSC is chaired by Cliff Hanley, who has also linked to videos by Lawson. In addition he has linked, apparently approvingly, to a now-defunct Facebook group which declared that "Judgment Day will be brought upon us only once the Muslims have killed all of the Jews".[6] 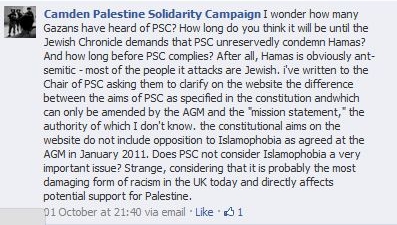 Camden PSC on Hamas and Islamophobia.

The Camden branch of the PSC boasted Gill Kaffash as secretary; this woman stated that "[t]here is no doubt that a great number of Jews along with other victims of the Nazi army were killed by Hitler. However, historical phenomena need to be further examined to uncover the truth." At one point its membership also included one Paul Eisen, who argues that "Palestinians must know that they are not just facing the might of the Israeli state but also the power of organized world Jewry and its primary arm, the Holocaust. Perhaps Palestinians should consider lobbing a few stones in that direction."

The PSC considered kicking Eisen out for these remarks, but he resigned himself before they came to a decision. He has since claimed that Kaffash supported him during the controversy.[7] Kaffash was later asked to resign.[8]

Tony Gratrex, a representative of the PSC's Reading branch,[9] believes that Jews control the media and banks. "You state that the jews do not control the media but that it is under self censorship", he said in an online discussion. "This is patently wrong and only a cursory glance using the internet will show that a majority of the media is jewish owned or controlled... you use the expression 'who pays the piper calls the tune' and that is precisely the problem when one considers who controls the international banking system."[10]

Ellie Merton, chair of the PSC's Waltham Forest branch, believes that Anders Behring Breivik was working for Israel. She posted her conspiracy theory on Facebook: "Just re-watched Hillary Clinton's statement about the Norwegian terror atrocity, and she looks 300 per cent shifty, implying she knows exactly who did it and why, and she's embarrassed about it was 'her' guys - an Israel government-sponsored operation." She also stated that "This geezer was actively hooked up with the EDL who, as we all know, is inextricably linked with Zionist Federation in the UK".[11]

The website of the Leeds PSC branch contains an FAQ section making the curious claim that "PSC, like Arafat, accepts the inevitable presence of the Israelis and that pushing them all in to the Mediterranean is now not an option."[12] Well, it's good to know that the PSC isn't planning to push all the Israelies into the sea, but at what point did they think it was an option? The website of the York branch contains largely the same FAQ, although this version has since been edited to read that "'pushing them all in to the Mediterranean' is not now, nor has it ever been, an option".[13]

The Leicester PSC website is registered to Harry Perry of the Leicester Secular Society.[14] Perry wrote an article for one of the society's publications entitled "The Jewish Problem", commenting on a Channel 4 documentary presented by Peter Oborne. "You may be feeling slightly uncomfortable now about such free use of the word ‘Jews’ when the norm in this discourse is to use terms like ’Zionists’ or ’Israelis’", wrote Perry. "Oborne was careful to state that they found no evidence of a conspiracy as such and yet there is no doubt that the use of free tours of Israel for hundreds of MPs, the donations from Jewish businessmen to sympathetic parliamentarians and the pressure on media editors from Jews in positions of influence and power does have the nature of a conspiracy." He continued: "This, then, is the new ‘Jewish problem’: how to objectively describe what the Israeli Jews are doing, with the secretive support of a few wealthy Jews here, without mentioning Jews and thereby being accused of anti-Semitism?"[15]

Liverpool Friends of Palestine is a group which claims to be affiliated with PSC. An article on its website, which has since been removed, reprinted a drawing by neo-Nazi cartoonist "A. Wyatt Mann", showing a handsome white American soldier being ordered by a grotesquely caricatured Jew. "The ADL and other Jewish Zionist organizations continue to agitate the public with the scarecrow of anti-Semitism attempting to suppress truth about the illegality, brutality and barbarity of the zionist project", began the article. It went on to state that "Jews are Eight Times Over Represented in Parliament".[16]