The attacks committed by Anders Behring Breivik in July 2011 have spawned a number of conspiracy theories by fools who have nothing better to do than cast unfounded aspersions at whichever ethnic, cultural or otherwise group is their personal bogeyman based upon nothing more than coincidence, guilt by association and bad application of the evidence.

Allegations that the Freemasons were responsible[edit]

Breivik was a Mason at the time of the attacks, a fact leapt upon by Alex Jones.[2]

Allegations that Israel was responsible[edit]

We're sure Palestine will really benefit from your solidarity.

Ellie Merton, chair of the Waltham Forest Palestine Solidarity Campaign, posted her conspiracy theory on Facebook: "Just re-watched Hillary Clinton's statement about the Norwegian terror atrocity, and she looks 300 per cent shifty, implying she knows exactly who did it and why, and she's embarrassed about it was 'her' guys - an Israel government-sponsored operation." She also stated that "This geezer was actively hooked up with the EDL who, as we all know, is inextricably linked with Zionist Federation in the UK".[3]

Saman Mohammadi has suggested that the attacks were organised by Mossad with the aid of the CIA and NATO. "This is not purely a Zionist crime", he writes. "This is a crime by the entire axis of evil that has captured Western democracies: the rogue CIA, the criminal Mossad, and the illegal NATO. All their interests were being challenged by the democratic government of Norway."[4] Stephen Lendman has also suggested a collaboration between the Mossad and CIA, and has also theorised that MI6 was involved.[5]

"Was this a genuine terrorist attack," asks Madison Ruppert, "or was it yet another attack carried out by some element of the international intelligence community in order to draw attention away from the Israeli operations abroad, the looming financial crisis, the austerity measures being put in place in response to it, the massive daily swindling of public funds, and the crumbling support for the wars in Libya, Afghanistan, Pakistan, Iraq and Yemen?" the same article refers to al Qaeda as "Anglo-American run".[6]

Nytt Norsk Tidsskrift, a multidisciplinary peer review journal, ran an article by Professor Ola Tunander in which he argues that terrorist attacks on the scale of the Oslo atrocity usually have the backing of a state, and outlines tensions between Israel and Norway. "We have discussed the right-wing extremist Israeli and Judeo-Christian side of Breivik’s network, Israel’s interest in disciplining Norway, and Israel’s celebration of bomb attacks. In this respect, Breivik’s attack appears to resemble a new King David Hotel attack: July 22nd", said Tunander. He has since denied that his article was trying to blame Israel for the attacks.[7] No word yet on whether Nytt Norsk Tidsskrift has been made to hand in its peer review card.

Professor Johan Galtung, a respected pioneer in the field of peace studies who has in his old age drifted into antisemitic conspiracy theories,[8] suggested that a link between Mossad and Breivik could have been covered up by the media. "The Jews control U.S. media, and divert for the sake of Israel," he said. [9]

Allegations that Muslims were responsible[edit]

"[T]he official story from the Socialistic government doesn't add up, convincing many that this is a false flag operation and actually the work of Muslim terrorists", says Conservapedia contributor "AngusT". "Evidence for this includes a Muslim terrorist organization claiming credit, the unlikelihood of two separate attacks in two distant areas being carried out by one person on the same day, the fact that this attack has all the hallmarks of Muslim terrorists, and the fact that Christian conservatives never do this sort of thing."[10] 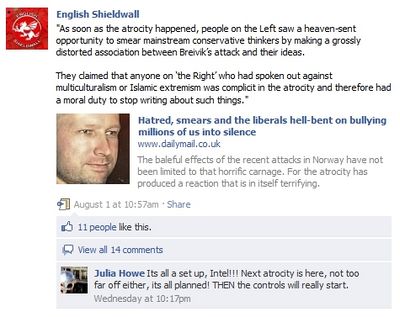 "This has all the appearances of a cover-up," said Michael Savage in an interview with WorldNetDaily. "They created their Reichstag fire. They found their Timothy McVeigh. They created their Jack Ruby. How could one man have blown up the downtown and then raced to the island to kill the teens?" He went on to state that "This is likely a fabrication of the Labour Party, who needs to hold onto power to enforce their multi-culturalist, Muslim-favoring, anti-nationalist views, especially in light of the earlier 'credit' for this atrocity claimed by the radical Muslim group whose leader they were threatening to deport."[11]

"Steed" of the Anglo-Saxon Foundation argued that Breivik was "doing the State's bidding." "Firstly, the NWO want[s] to take guns out of the hands of ordinary Norwegians (and all people eventually) and put them into the hands of Norwegian police", he continues. "Secondly, the NWO want[s] to demonise ALL people who hold 'right-wing' views (in practice, anything that opposes their Marxist, totalitarian ideal), as we are the biggest ideological danger to our governments. Thirdly, this man is claimed to be a 'Fundamentalist Christian' - this actually serves two purposes - to show that Christians can be as violent and Fundamentalist as Muslims, thus exonerating Islam briefly, and also to demonise Christianity. We can see the Western world promoting atheism.. the new religion (of the consumer slave)."[12] Who knew that people who call themselves fundamentalist Christians do so to demonize Christianity?

In the same thread, "Guthlac" states that "when socialist labour/liberal factions find their popularity dwindling in their own countries, they suddenly have one of their own killed or an attack such as this."[note 1] He also theorises that the atrocity was "an organised attack from within the socialist/liberal movement in an attempt [to] stir hatred against the rising tide [of] Norwegian nationalism" because "the liberal[s] infiltrate each and every party or organisation they do not like, in an attempt to either steer from within or discredited [sic] and undermine."[13]

Following the attacks but before Breivik was accused, "abu~Adil as somali" of the Islamic Awakening forum declared the attack to be "another false flag op, every year a European country is targeted such as Denmark, Sweden under the pretext of Islamic extremism and now in Norway, more anti Islamic laws, and more anti sharia demos...". Another member stated that he was "Almost certain this was an inside job to justify further invasion of Muslim countries"[14]

"So it seems the false flag operation to target Muslims has been exposed", said member Abu Abdurrahman after Breivik was accused. "Isnt it very convenient that a fringe 'Islamic' group set up on an internet forum claims responsibility after the blast hours after it happens?"[15]

"9/11 was an inside job", says another post. "Norwegian killings were perhaps failed inside job."[16]

In response to a report that Breivik had plastic surgery to make him look "more Aryan", "stormrider73" of the David Icke forum commented that "Maybe he was an arab before op? Because he definitely works for Lukashenko and hence - Gaddafi".[17]

Member "talktalk", meanwhile, has suggested that Breivik, Alex Jones and Julian Assange are all the same person. This is based on the evidence that the three look vaguely similar, have not been seen in the same room together, and that two of them have similar initials.[18]

Another member of Icke's forum, "cather", has suggested that Breivik is one of the four horsemen of the apocalypse. "Anders means manly>>Breivik means One who came from Breivik{grain farm}" he said in a thread about a crop circle made near the Cherhill White Horse in Wiltshire. "The crop circle appeared in a grain field......Anders Breivik is the symbolic MAN on the White Horse,,,who carries a bow & arrows.....He killed many yet is still alive ...he accomplished what he set out to do...He is victorious... He will SOON be followed by War,Famine ,plague/Death...."[19]

Frank Gaffney, one of the individuals cited in Breivik's manifesto, did not propose any conspiracy theories regarding the actual attacks but did suggest that the manifesto was not written by Breivik, but was rather a hoax penned by the Muslim Brotherhood. "It cries out for a thorough investigation as to whether it was in fact an authentic piece of his own creation, whether it’s a false flag operation, whether it actually was meant to do anything other than to contribute to Sharia’s efforts to suppress criticism and awareness of its agenda", he said.[20]

One commentator has suggested that the attacks were predicted by the Illuminati card game.[21]

Anglo-Saxon Foundation member "Southerner" appears to have suggested that Wikipedia is somehow involved in the alleged conspiracy. "Wiki didn't waste any time", he said, alongside a link to the Wikipedia article on Breivik.[22] "I thought it was funny, in more ways than one, that they got that up so quickly... This smells".[23]