Islamophobia is a term used to refer to discrimination or prejudice against the religion of Islam and the Muslim people (the people who believe in Islam), especially as a political force.[1] Nearly all Islamophobes are also xenophobes, who have a generalised dislike of foreigners. Sometimes, however, the term "Islamophobia" is used as a snarl word to dismiss valid criticisms of Islamic doctrines and ideologies.[2]

According to the Oxford English Dictionary, the first known use of the term occurred in the 1920s,[3] though it has come into more frequent use since the 1997 publication of Islamophobia: A Challenge For Us All by the Runnymede Trust,[4][5] and even more so to describe the backlash against Muslims following the 9/11 terrorist attacks.[6][7]

On the outside, one can distinguish Islamophobia and racism - Islam is a religion, not a race, and is commonly practiced among many ethnicities.[note 1] However, racism may fuel Islamophobia, as the narrow Western perception of Islam often associates the religion almost exclusively with the Arab ethnicity and with Middle Eastern culture ("brown people in turbans").[8] Islam is a collection of ideas and beliefs, and, like all religions, should be criticized by rational people. When dislike of Islam takes the form of mindless irrational hatred based on cultural stereotypes, however, it becomes Islamophobia and has many parallels with racism. For instance, Islamophobes often target Sikhs because Sikhs resemble common notions of what Muslims "look like", despite the tension that has existed for many years between Sikhs and Muslims,[9] and despite Sikhism and Islam being separate religions. It's additionally worth noting that the modern concept of racism has its origins closely tied to religious discrimination, with the Spanish concept of limpieza del sangre

, or "purity of blood", originally only applying to Jews and Muslims but later, with the Spanish colonization of the Americas, also applying to black and indigenous people.

Some who protest that they cannot be racist because they are only ranting and obsessing about a religion do so too loudly: "I did not have racist relations with that religion", as Nesrine Malik puts it.

With the rise of Donald Trump, the importance of calling out Islamophobia is becoming even more important. Raed Jarrar, an Iraqi-born activist who works with the American Friends Service Committee, says:[13] 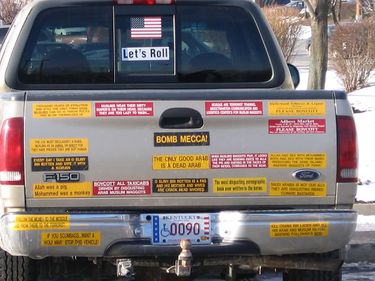 In 1996, the Runnymede Trust established the Commission on British Muslims and Islamophobia, chaired by Gordon Conway, the vice-chancellor of the University of Sussex. The Commission's report, Islamophobia: A Challenge for Us All, was published in November 1997 by the Home Secretary, Jack Straw. In the Runnymede report, Islamophobia was defined in general as "an outlook or world-view involving an unfounded dread and dislike of Muslims, which results in practices of exclusion and discrimination." This is not the common English meaning of "Islamophobia"[14] in Britain which is, "dislike of or prejudice against Islam or Muslims, especially as a political force."

In detail, The Runnymede Trust defines Islamophobia as having the following characteristics:

The largest project monitoring Islamophobia was undertaken following 9/11 by the EU watchdog, European Monitoring Centre on Racism and Xenophobia (EUMC). Their May 2002 report "Summary report on Islamophobia in the EU after 11 September 2001", written by Chris Allen and Jorgen S. Nielsen of the University of Birmingham, was based on 75 reports — 15 from each EU member nation.[15] The report highlighted the regularity with which ordinary Muslims became targets for abusive and sometimes violent retaliatory attacks after 9/11. Despite localized differences within each member nation, the recurrence of attacks on recognizable and visible traits of Islam and Muslims was the report's most significant finding. Incidents consisted of verbal abuse, blaming all Muslims for terrorism, forcibly removing women's hijabs, spitting on Muslims, calling children "Osama", and random assaults. A number of Muslims were hospitalized and in one instance paralyzed. The report also discussed the portrayal of Muslims in the media. Inherent negativity, stereotypical images, fantastical representations, and exaggerated caricatures were all identified. The report concluded that "a greater receptivity towards anti-Muslim and other xenophobic ideas and sentiments has, and may well continue, to become more tolerated."

The EUMC has since released a number of publications related to Islamophobia, including The Fight against Antisemitism and Islamophobia: Bringing Communities together (European Round Tables Meetings) (2003) and Muslims in the European Union: Discrimination and Islamophobia (2006).[16]

Islamaphobia can also appear in the following forms (not from Runnymede Trust):

Islamophobia as xenophobia or nativism[edit]

The rise of and fight against ISIS Around the 2016 US elections led to a dramatic increase in Islamophobia that deserves its own section. Khaled A Beydoun, an assistant professor of law, writes:

While 60 percent of Republican voters support Trump's Muslim ban, this number is presumptively higher for Trump supporters. Seventy-five percent of South Carolina voters, where Trump won handily, support the ban. Support for the ban was even higher in Alabama and Arkansas at 78 percent, where Trump won by roughly 22 percent and three percent, respectively.[37]

In 2015 and 2016 Islamophobic attacks against American Muslims have soared to their highest levels since the aftermath of 9/11. Hundreds of attacks such as arsons at mosques, assaults, shootings, and threats of violence have been documented. New data from researchers at California State University, San Bernardino, found that hate crimes against American Muslims were up 78 percent over the course of 2015. Attacks on those perceived as Arab rose even more sharply, proving that Islamophobia continues to have a racist character. In fact, the frequency of anti-Muslim violence, often against victims wearing traditional Muslim garb or seen as Middle Eastern, appeared to have increased immediately after some of Mr. Trump’s most incendiary comments.

The increase in reports of apparent hate crimes has worried Justice Department officials.

"We saw it after 9/11, and we continue to see an uptick in allegations of hate-related incidents today following the tragic events over the past year," said Vanita Gupta, who leads the Justice Department’s civil rights division. "We see criminal threats against mosques; harassment in schools; and reports of violence targeting Muslim-Americans, Sikhs, people of Arab or South-Asian descent and people perceived to be members of these groups," Ms. Gupta said.[38]

The Justice Department has moved to draw public attention to the problem and marshal resources to combat it as part of a broader effort against religious discrimination. A number of experts in hate crimes said they were concerned that Mr. Trump’s vitriol may have legitimized threatening or even violent conduct by a small fringe of his supporters.

Islamophobia is a controversial term for a number of reasons. Despite the implication of the term, those accused of Islamophobia are not actually afraid of Islam, but instead are highly critical of it (although an argument could be made that many Islamophobic people are irrationally afraid of Muslims bringing terrorism to their neighborhood). Despite the fact that it may not be an actual phobia, it is akin to the concept of homophobia.

Controversial New Atheists, such as Sam Harris[40] and Bill Maher[41] have endorsed Andrew Cummins' description of Islamophobia as “a word created by fascists, and used by cowards, to manipulate morons.”,[42] which Harris and Maher misattributed to Hitchens.[43]

, one of the cartoonists murdered by jihadists in the Charlie Hebdo terror attacks, attacked the concept of Islamophobia in a posthumously published article. According to Charb, most right-wing Islamophobes are actually just racists. By calling their racism Islamophobia these people get an intellectual veneer they don't deserve. "If one day all Muslims in France converted to Catholicism ... these foreigners or French of foreign origin would still be seen as responsible for all ills."[45]

Stephen Schwartz, an American writer and critic of Wahhabism, has stated that although the charge of Islamophobia is sometimes leveled too quickly against an opponent, that it is still a real phenomenon[46] which he defines as:

At a 2009 symposium on "Islamophobia and Religious Discrimination", Robin Richardson, a former director of the Runnymede Trust and the editor of Islamophobia: a challenge for us all, said that "the disadvantages of the term Islamophobia are significant". Nonetheless, he argued that the term is here to stay, and that it is important to define it precisely, instead of completely abandoning it.[47]

Hemant Mehta of the Friendly Atheist blog chimes in with a similar perspective on the importance of definition for the term to function:[48]

Criticism of Islam vs. Islamophobia[edit]

In a radio discussion on public radio between Reza Aslan and Sam Harris, Harris suggested that Islam is different from many other religions at this moment in its history because of its doctrines and the results of them, and Reza Aslan accused him of being a bigot for treating Islam as a special case.[50] New Atheists such as Richard Dawkins and Sam Harris, who are very critical of all religions, are often accused of bigotry and Islamophobia. However, Harris has defended the profiling of Muslims and "anyone who looks like he or she could conceivably be Muslim" in security contexts,[51] although he himself has been accused of articulating "dangerous" and "divisive" beliefs by religionists and their defenders. Likewise, Dawkins has a very long and controversial history when it comes to his opinions about Islamic culture. In an interview with Bill Maher he said:

Dawkins: "Oh, that’s their culture, you have to respect it."

Dawkins also accused Ahmed Mohammed of being comparable to an ISIS child soldier,[52] all of which lends some credence to the suggestion that their particular quest to prevent people from using the word "Islamophobia" in any context has ulterior motives.

PZ Myers has rather insightfully suggested that Dawkins' and Maher's team-up is "a combination to bring out the worst in both".[53]

In any case, while there are legitimate cases of bigotry towards Muslims,[note 4] the term "Islamophobia" can be used to disparage valid criticisms of Islam and the culture that arises because of following Islam and Sharia law to its literal phrasing. Stephen Fry has seen it applied against him too reflexively on Twitter.[54] CAIR activist Imraan Siddiqi has founded a site — Hatehurts[55] — dedicated to "tracking Islamophobia and the communities affected by it."

Noted Marxist philosopher Slavoj Žižek has also come out against conflating criticism of Islam with Islamophobia, refusing to accept (quote): "prohibiting any critique of Islam as a case of ‘Islamophobia’".[56]

Muslim women are uniquely vulnerable to sexism and Islamophobia, and the subsequent denial from Islamophobes that criticism against them is sexist or Islamophobic. Muslim women are visible targets for harassment when they wear headscarves and are also often subjected to negative stereotypes and forced to respond to misconceptions that they are oppressed and silenced by their religion. The Islamophobes pretend that they are "liberating" women by advocating for bans on headscarves or "burkinis".[57]

Donald Trump amplified those stereotypes when he claimed that Ghazala Khan, the Muslim American mother of a slain U.S. soldier, had not been permitted to speak due to Islamic doctrines. Ghazala clarified that she did not speak because she was "in pain" over the death of her son. Muslim American women denounced Trump’s comment on social media using the hashtag #CanYouHearUsNow.[58]