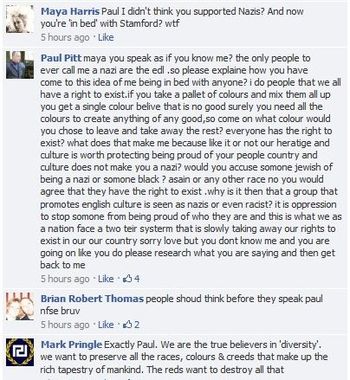 Paul Prodromou (active under the pseudonym Paul Pitt) is a right-wing British activist.

He was once in charge of the Essex, Kent and Sussex divisions of the English Defence League,[1] but was removed from the group in 2012.[2]

Prodromou is now reportedly the chairman of the South East Alliance,[3] a small outfit which appears to consist mainly of former Essex EDL members.[4] "WE ARE NOT A SPLINTER GROUP", says the SEA's Facebook page. "We are a non-political community based street movement that will seek to act as a platform for all existi".[5] Good to hear that all those lonely little existi now have a place of their own.

According to Hope not Hate, Prodromou is a close friend of Eddie Stampton (alias Mark Pringle[6]), a known neo-Nazi.[7][8] Both men are supporters of the Essex English Community Group.[9]

In March 2013 Prodromou led a group of fifteen right-wingers which accosted Nick Lowles and other members of Hope not Hate during a leafleting session in Havering. One member of the group posted video footage online, allowing Hope not Hate to alert the authorities.[10][11][12]

This politics-related article is a stub.
You can help RationalWiki by expanding it.
Retrieved from "https://rationalwiki.org/w/index.php?title=Paul_Prodromou&oldid=2451031"
Category:
Hidden category: