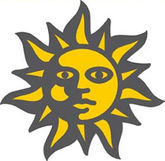 Light for all and Nazis burn

Hope not Hate (identified on official materials, but pretty much nowhere else, as HOPE not hate) is a British anti-fascist campaign emphasizing the racism espoused by said fascists. It was originally a front of the anti-fascist magazine Searchlight (now published by the magazine's founders through a separate outfit after being booted out) and is now chiefly supported by various British trade unions,[1][2][3] many of which support the Labour Party or other minor parties to the left of Labour.[4]

It is fronted by Nick Lowles.

The campaign's activities include bus tours[5] and a petition to former BNP leader Nick Griffin.[6] Its website runs two blogs — one by Nick Lowles, the other by "the Insider" — that provide regular news on far-right movements.[7][8]

HnH has been accused by some critics[Who?] of ignoring Islamic extremism; however, the campaign's site has targeted Muslim fundamentalist Haitham al-Haddad,[9] denounced honour killings[10] and includes al-Muhajiroun alongside the BNP, the EDL and others in its profiles of hate groups.[11]

Though HnH, being an anti-fascist campaign, understandably focuses primarily on the hate espoused by fascists while letting other hate off comparatively easy, at least Hope not Hate does not appear to be actively aligning itself with Islamists - unlike Unite Against Fascism.[12][13]

The campaign's opposition to al-Haddad, incidentally, has resulted in its condemnation by Muslim nut Laura Stuart and the ranting saxophonist Gilad Atzmon (the latter branding it "a Zionist outlet").[14] 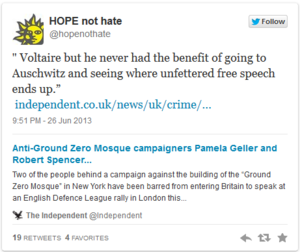 In April 2012, tying in with the trial of Anders Behring Breivik, HnH released its official shit-list a report on what it termed the "Counter-Jihad movement". The report describes the Counter-Jihad movement as "the new face of the far right in Europe and North America", with an ideology defined by the treatment of all Muslims as extremists and the belief that, due to immigration and multiculturalism, the West is in danger of being taken over by Islam. The report lists hundreds of individuals and organisations involved in the alleged movement; according to HnH, each of them is partially responsible for Breivik's killing spree (guilt by association, perhaps).[15]

The list is broken up by country; amongst the names included are the American Family Association; Pamela Geller and her Atlas Shrugs blog; WorldNetDaily;[16] the BNP; Combined Ex Forces; Stephen Lennon and his English Defence League; March for England; and Alan Lake.[17] The resulting overview tends to veer from well-researched information to daft hyperbole: English Shieldwall, a tiny nationalist organisation that currently appears to consist of one guy and his mates ranting on a Facebook page, is described as "shadowy".[17]

Although taken at face value by news services[18][19] the report has been criticised. Blogger "Happy Propagandist" dismissed it as "complete nonsense," in particular objecting to the inclusion of three Christian charities: the Christian Concern, the Christian Legal Centre and the Barnabus Fund. "Unfortunately, this report seems more like a knee-jerk list conflating hooligan groups, anti-Islamists, conservatives, and those who are simply opposed to immigration or are concerned about the persecution of non-Muslims", concludes the post.[20] In fact, critics of Islam who are generally classed as left-of-centre (such as Richard Dawkins, Taslima Nasrin or One Law for All) are absent from the list.

As noted above, the inclusion of the Barnabas Fund, a charity for minority Christians in majority Muslim countries, resulted in objections; the organisation was later removed from the list. Similarly, Roger Scruton's entry caused some to raise their eyebrows.[21][22]