From RationalWiki
(Redirected from Proselytization)
Jump to navigation Jump to search 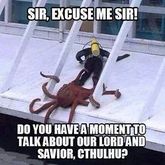 Evangelism: yes, it really is this terrifying.

Evangelism (from the Greek ευαγγελος, "evangelos", "good message") involves the act of proselytizing a position — usually, but not always, a religion — on the basis of some "truth value". The term is also used for the promotion of various philosophies in politics and in technical fields, particularly in computing, and has become marketing jargon. The concept springs from the spreading of the Christian gospel (ευαγγελιον, "evangelion" — literally from roots meaning "good news").

Evangelism, as a form of public relations, tends to focus on the positives of the message it aims to spread, sometimes even misrepresenting the message to make it more palatable to newcomers.[1]

Not all religions actively engage in proselytization; while most Christian and Islamic denominations, for example, by-and-large insist on trying to bring in new members[2] (sometimes even with the threat of violence), Judaism often actually discourages conversions and Shinto — which is based more around geography than around dogma — generally lacks the concept of "conversion" altogether.

This religion-related article is a stub.
You can help RationalWiki by expanding it.
Retrieved from "https://rationalwiki.org/w/index.php?title=Evangelism&oldid=2474504"
Categories:
Hidden categories: