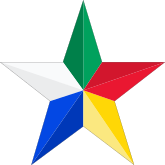 The Druze star. Kind of a religious symbol but not really.

Druze is a syncretic monotheistic Abrahamic religion and ethnoreligious group based in the area surrounding southern Lebanon in the Middle East. Druzes call themselves muwahiddun (Arabic for monotheists).[1] Druze faith is an offshoot of the Ismaili branch of Shia Islam, which developed through syncretism with Greek philosophies such as Neoplatonism and some other philosophical and religious strains such as Gnosticism.[2] However, the Druze do not identify themselves as Muslims and the Druze are considered as a separate religion from Islam.[3][note 1] Their main religious doctrine basically considers God to be everything, which means both transcendent and immanent, kind of like pantheism.[note 2] Druzes are situated mostly in three Levantine countries, Syria, Lebanon and Israel, and there are substantial numbers living in diaspora as well. Each of the communities are loyal to the state to which they belong. The Druze are known for forming a close-knit and highly secretive community in which it is not easy for non-Druze outsiders to be accepted. The Druze do not permit conversion or apostasy.[1]

The Druze faith was first preached by an Ismaili mystic and scholar named Hamza ibn Ali ibn Ahmad during the early 11th century.[4][note 3] His advocacy gained the support of Al-Hakim, the caliph of Shia Islamic Fatimid Caliphate

based in Cairo. Al-Hakim and other theologians began the Druze movement proclaiming Al-Hakim as a divine figure.[1] The caliph supported religious freedom, and as such the Druze grew substantially during his era. After the presumed assassination of Al-Hakim, the successive caliph Ali az-Zahir began persecuting the Druze due to the movement believing in Hamza as imam,[5] and they were deemed to be among the opposing factions of the internal power struggle within the ruling class. The group also caught the opposition of the Fatimid religious establishment.[1][6] During the course of events, tens of thousands of Druze were massacred and 5,000 leaders were killed, leading to the faith going underground and relegated to the southern Lebanon area, which continues to this day.[6] Druze also ceased to recognize conversion to the faith during this time which a practice continues until today.[1]

The Druze briefly recovered their reputation during the time of the Crusades, crusaders being the common enemy among the Arab-Islamic factions. The Druze, just like many other close-knit minority groups, was already a potent force and fiercely fought against the Crusaders, earning respect among the Sunni Muslim caliphs, and gained political powers.[1] However, during the Mamluk period, after the fatwa of extremely influential and controversial imam Ibn Taymiyyah

calling for the cleansing of heretical faiths including Alawites and Shia Islam, the Druze began facing persecution again which continued during the Mamluk era and throughout the Ottoman era. Periodically, Druze forces initiated rebellions against the central government, which was countered by the rulers who were unable to fully conquer their stronghold in Mount Lebanon.

The Druze managed to hold strong under the Ma'an family based in Mount Lebanon, which briefly expanded their dominion across all of Syria, especially under the rule of Fakhr-al-Din II in the 17th century. Fakhr-al-Din II was the first ruler in Lebanon who opened the gate for Christian missionaries, and he forged an alliance with Maronite Christians to fend off direct Ottoman authority and even signed a treaty between Duke Ferdinand I of Tuscany, which demonstrates the extent of his influence.[1] This led to the Ottomans accepting the political autonomy and privileged position of the Druze within Mount Lebanon.[7] The Ma'an family was succeeded by the Sunni Muslim Shihab dynasty, which later converted to Maronite Christianity, until the 19th century. From the mid-19th century, Maronite peasants began demanding independence from the Druze feudalism which put the latter in a privileged position. This culminated in the civil war in 1860 between Druzes and Maronites, and ended in the Druze massacring tens of thousands of Maronites in southern Lebanon.[8]

There are around 600,000 Druzes in Syria,[9] mostly residing in the southwestern region, making the largest Druze population in the world. While it amounts to merely around 2% of the total Syrian population, it played an important role in the history of modern Syria. The Druze military was especially important during the early days of Syria in which it was basically the only formidable force of the nascent country, so it contributed greatly during the war of independence against France. The Druze expected autonomy and political privilege in exchange. However, the thankless Syrian ruler in Damascus considered the Druze a dangerous enemy when 4,000 of them could occupy Damascus in a minute (the latter may be true). After the build-up of the Syrian Arab Army (SAA) during the 1948 War in Palestine, the SAA began a heavy military campaign against Druze territory under the direction of Adib Shishakli. Although Shishakli was later assassinated by a Druze gunman in 1964, the Druze community suffered substantial damage.[10] Fast forwarding to the Syrian Civil War, the Druze took an opposing stance to the Assad regime during the initial stage of the civil war when the Free Syrian Army (FSA) was still alive.[11] Their position in the civil war seems to be neutral after the virtual collapse of the FSA.

There are around 200,000 Druzes in Lebanon,[12] who also played an important role in the country's history in spite of constituting a mere 5% of the total population. Before and during the Lebanese Civil War, the Druze were supportive of pan-Arabism and the Palestinian Liberation Organization (PLO). As such, they fought alongside the leftist groups and Palestinian parties against the Christian militia.[13] Today, Druzes and Maronites have reconciled.

There are around 130,000 Druzes in Israel,[14] mostly residing in the northern region, who are known for actively taking a pro-Israel stance on the issue of the Israel-Palestine conflict, contrary to the Druze community in Lebanon. In contrast to Muslim Arab communities in Israel, the Druze are not exempt from serving in the Israeli Defense Forces (IDF). There are groups of Druze Zionist movements as well.[15]