, which is, unlike a missionary, a whole bunch of fun.

Missionaries are representatives of a religion who travel to a distant location (across town - as in a so-called "Domestic Mission" - or across the globe) to convert the benighted strangers who live there to the correct faith (or to the correct version thereof). Sometimes an ecclesiastical power structure will dispatch missionaries, as with Mormon or Catholic missions; sometimes missionaries self-appoint themselves to labor in God's vineyard. Missionaries frequently, but not always, carry out charitable programs as well as proselytizing. In some cases, "charitable" missionaries have demanded a conversion before providing relief for disasters.[1]

Missions once tended to operate in broad parallelism with colonialism. Now that colonialism has gone out of fashion, neo-colonialism may provide a better supporting ideology.[2]

Activities of Christian missionaries can encompass a wide range, often involving some mixture of them. Notable activities are: medical (e.g., World Medical Mission), humanitarian (e.g., The Christian Alliance For Humanitarian Aid), education, aviation (Mission Aviation Fellowship), linguistic (SIL International), as well as strict proselytizing. Sometimes these organizations do important charitable work, other times it's just a cover to get more bodies on the tally sheet for Jesus, and other times they are an espionage front like Kay Hiramine's Humanitarian International Services Group.[3]

SIL International[note 1] (formerly known as the Summer Institute of Linguistics, based in Texas), was accused of being a front for the CIA in several countries,[4] and was evicted from several countries in Latin America for this.

NTM, perhaps the most notorious missionary group, was founded in 1942 by Paul Fleming; it is currently based in Florida. NTM is a biblical literalist organization that is focused on proselytizing particularly vulnerable populations, those that are remote, illiterate, and have never been proselytized.

When NTM started its missionary work, it had an auspicious beginning: God smiled down upon them. 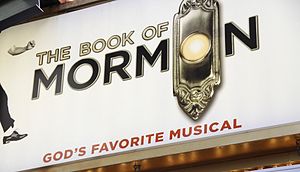 Not so fun when it's your doorbell.
See the main article on this topic: Mormonism § Missionaries

The LDS church is particularly noted for its numerous missionaries, as all male Mormons are expected to spend an entire year "on mission" to a destination of the Church's choosing upon reaching the age of majority. These missionaries are expected to adhere to a strict set of behaviors and are trained to emotionally manipulate their targets in various ways.

In the 19th century, as exploration opened up the center of Africa, missionary activity became common, and missionaries became celebrities, their actions reported in newspapers. Most famous was the Scottish explorer, missionary, and writer David Livingstone, who made a series of journeys through south and east Africa, mapping out the territory that would form the African portion of the British Empire. The only problem with this is that in all his years in Africa, Livingston managed to convert a total of one person, Kwena chief Sechele, to what is now Botswana, and even he proved reluctant to give up his multiple wives.[14]

What goes around comes around[edit]

Way back when Europeans went to the Americas and Africa to convert people to Christianity. They were successful, to say the least. So much so, that some places (particularly Latin America) are now more religious than most of Europe. This of course has inspired a lot of missionaries from those extremely religious countries trying to convert the "heathens"[15] in Europe. While their methods are often not exactly as disgusting as those outlined above, they (as missionaries do everywhere) particularly pray prey on the vulnerable, for example, those who just went through the loss of a loved one or similar personal tragedies. Of course, this is not limited to mainline Christianity and various "charismatic" or pentecostal churches are more likely to engage in this sort of mission. Other religions of course do the same thing, but it does not have the same sweet irony when a Muslim comes to convert people to Islam as when a Christian comes to convert people in a country that sent the missionaries that converted his great-grandmother.

And way, way back when, a small bunch of folk from the Levant went to Europe to win souls for adherence to the new-fangled proto-Neo-Judaism of Jesus of Nazareth and of Saul of Tarsus. They had some success over the centuries - so much so that the new faith put down much deeper roots than in its homeland, and eventually Europeans, still fired with zeal for novelty, started to re-export their versions of Christianity and society back to the Middle East. As we know, that didn't always turn out so well.

Islam also has a long history of missionary activity. In recent times, this has largely taken the form of Islamic education centers.